These are my calculations just using information available to the general public.  From ‘Marine Traffic’ the vessel was alongside in Portsmouth at 0654UTC.  The ‘Time and date’ website gives sunrise at Portsmouth at 0453UTC and azimuth Sun as 067 degrees.  Let’s assume the photos were taken around 0500UTC when the Sun’s azimuth would have been nearer 069.  Also, the crew haven’t assembled around the deck yet, so she probably is still in the Solent.  Lets assume the vessel is beam on the photographer; this will allow us to calculate the maximum range.  From the newspaper, I see the vessel is 280m long.  On the screen, this equates to 122mm.  The Sun measures on the screen as 19mm, so the Sun equates to 19x280/122=44m wide in the photograph.  The Sun subtends an angle of approximately half a degree everywhere on earth, so the range is approximately 44/sin 0.5 degrees = 5042m; call it 5km.  Going to the Solent area on Google Maps and drawing a 069-249 on my Douglas protractor and marking on 5km from the Map’s scale, puts the photographer somewhere near Ryde on the Isle of Wight (see photo below).  Enlarging the map shows there is actually a pier at Ryde with a pier head car park and also a ferry from Portsmouth.  This seems as good a bet as any.  Of course, I could be completely wrong.  DaveP 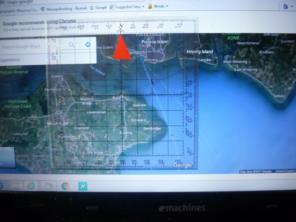