Antoine, you wrote:
"I simply cannot believe it ... So where is the picture taken from actually ?"

You were certainly close. I had hoped to wait a little longer, but I don't want to keep you waiting. And since no one else is playing, I'll just attach the solution to this message as an image. I think you would agree that the profile of the mountain is an exact match, yes?

You wrote:
"As regards the Longitude determination (+/- 45°) , you got it from the Stellarium time, did you not ? If so I cannot compete at all here ...
Or which other method did you use ?"

You got the latitude within some modest margin of error, of course. And the same analysis also gives LHA Aries, which for me is about 194.4°. Next the position of Mars can be determined exactly enough to give the Greenwich date as 19 March 2012 and a crude estimate of the UT at 00:30 +/- 4 hours (more on this in another post). With that information, we can get a longitude in the range from roughly 46° West to 74° East (that's +/-60°, not +/-45° as I had written previously). In that range, the coast of Norway was the best bet for a mountainous coastline on the ocean facing west (the same analysis tells us we're facing more or less due west). After that it was just a matter of entering Google Street View and exploring to find a likely location. Fortunately I had done something similar in the same area for a historical solar eclipse just last year so the available road network was quite familiar! I've never been to Norway in the real world, but this area felt like an old haunt. And random luck was on my side, too. I found the actual spot in under fifteen minutes from my starting point. 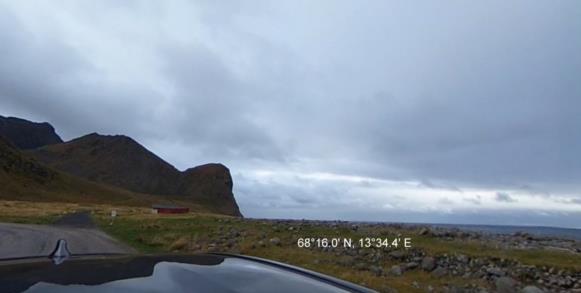