Antoine Couëtte, you wrote:
"Mars, at Magnitude M = -1.9 It is then significantly brighter than Saturn at Magnitude M = 1.6 on early 2008 . Mars tabular Declination is about 1° higher than Saturn's, which makes an even better match on the picture. Only the reddish color is missing on my laptop and on my printed copy. However on Magnitude and Position criteria Mars looks better than Saturn. Then .... let's go for Mars. Mars being at 2,680' away from Castor as measured on the picture, my best estimate for the date now becomes 15 March 2012, i.e. 4 days from Frank's 19 March 2012."

That's right. It's Mars! The technique you're using to determine its position in the photo is an excellent start, of course, but it doesn't work well to get the exact position. You're measuring long distances across the photo. Those long angles may be subject to optical distortions and orientation issues as well as similar distortions resulting from any image processing. For Mars in this photo, you'll do much better if you zoom in on the planet. There are a dozen faint stars within a few degrees of the planet, and they only match up on 19 March 2012 (close to 0h UT, to be specific). In the attached images, I've got a Stellarium simulation and also a clip from the original photo. I hope you can see how closely they match. It's dead-on! By working at such short angles in the image, distortions are no longer a concern.

I won't keep you in suspense on the exact location much longer. You're very close! As a preview, you can limit yourself to Norway based on the rugged mountains (and the fact, from another hint I posted, that you can drive there). The astronomy gets us the latitude within about 1° and the longitude maybe within 45°. Getting the exact location demands at least the non-astronomical details on the view of the mountains in the photo. 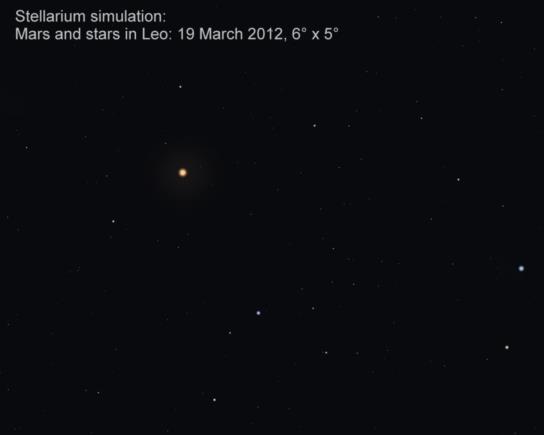 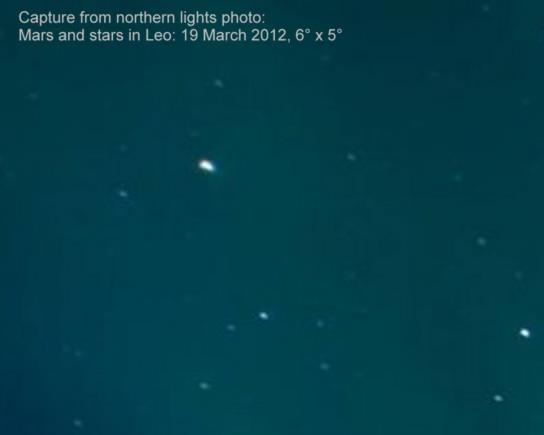