Now, the publication he cited was 50 years old, and we know that the magnetic north pole has migrated considerably in that time.  The other thing is that it seems that the use of "oersted" as a unit of measurement has been superceeded by nT (nano Tesla).  I have been unable to find any resources that relate oersted to nT.

I have just now been able to find a chart of horizontal field strength centered on the north pole that is current to year 2019.  I have also found a description that indicates where the zones of erratic compass behavior lie:  https://www.ngdc.noaa.gov/geomag/faqgeom.shtml#What_happens_to_my_compass_at_the_magnetic_pole

Given that 6,000 nT appears to be a bit of a break point, I have highlighted that line on the chart.  Attached.

To make things worse for vessels and aircraft navigating the far north, GPS satellites (which have an orbital plane of 55° to the equator) may appear relatively low in the sky and are subject to increased noise due to the amount of atmosphere the signal travels through.  Further, geomagnetic storms (which will lead to striking aurora borealis) can cause GPS "receivers to loose lock on the satellite signals, limiting positioning and navigation capabilities."  https://mycoordinates.org/challenges-for-positioning-and-navigation-in-the-arctic/

It looks like if one's ambition is to sail the Northwest Passage, he is going to encounter a number of navigational challenges. 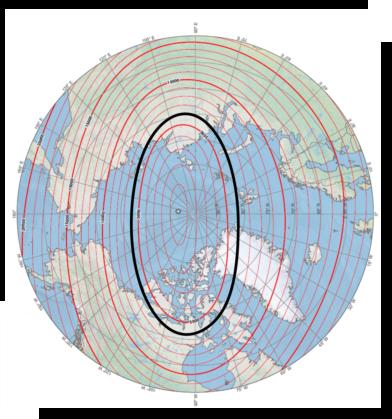