Stan, you wrote of one of the options for "dealing" with life:
"2) Start knocking things off my bucket list as fast as I could.  But I felt this would be like giving up, like there was no hope.  And I refuse to give up hope."

Right! Plus how does a bucket list make sense, and when did people start talking about those damn "bucket lists" anyway?! If one has a bucket list, then there are two problems: first, lack of imagination... things to do before you die? Isn't that list infinite? second, isn't that "bucket list" just a "to do as soon as possible list"? Shouldn't we be living every day to do the things on our list of things we want to do (within the usual practical and financial limits, of course). And finally, it seems that no one understands the absurdity of the bucket list concept better than people fighting cancer. One of my all-time favorite movie reviews (in the "this movie sucks" category) was Roger Ebert's review of the movie "The Bucket List". This was after Ebert's cancer treatments. Read it and laugh: https://www.rogerebert.com/reviews/the-bucket-list-2008.

You wrote:
"The side effect that does not go away is fatigue.  It seems to peak on the second and third days after the chemo, when it is easy for me to sleep the entire day.  But for the other five days of the week I am fully functional.  Well, maybe not as fully functional as Lieutenant Commander Data, but pretty good."

Ha ha ha. Hey, did I already tell you Picard is coming back? They're doing some sort of "retired captain" series next Spring. Meanwhile, I'll share here, for your Trekkie benefit as well as other NavList Trekkies, my latest bit of "art". This past weekend I watched Hitchcock's "The Birds" which, from a strictly "sci-fi" thriller perspective could be re-titled "Jurassic Park: the Prequel" or "Jurassic Park: the Real Dinosaurs". But as I was watching I began to notice a certain resemblance between the lead character and a Star Trek character. And then I remembered a line from a ship's captain in the Trek universe: "she's describing a raven!" (that character was abducted from a starship called "The Raven"). And then it hit me: Seven of Nine is Tippi Hedren. See attached comparison.

You wrote:
"I have been working on a train table and train display shelves for my grandson"

I may need to come down and inspect this train table. Of course I'm not going to play with the model trains. No, no. I would merely experiment with various configurations and test out certain scenarios for an hour or so to confirm functionality. :)

You wrote:
"There is even something I am doing that I did not do before the diagnosis.  I am no longer concerned with making a fool of myself, so I have been performing at open mikes, playing the guitar (not bad) and singing (not good).  Nice crowds - there are acts worse than me, and even they get applause.  I have become friendly with some of the amazingly talented performers, of which there are quite a few."

Awesome! You're a natural public speaker, so I imagine you transitioned easily to public performing. You tell stories before you play and sing, right? :) I have a friend that I met here on the island (one of the world's premier harpists) who has performed before presidents and Oprah, and she had a solo show at Carnegie Hall. I'll see if she can get you in.

You concluded:
"Bottom line - I feel pretty good, and expect to make it to Frank's NavList dinner in Mystic on the 27th, where I hope to see many of you.  I'll be the guy with the scruffy whiskers (no way to call it a beard) and the hat keeping my bald head warm.  (My wife says that without the whiskers, when I take the hat off I look like an alien.)"

Excellent. We'll see you there. Resistance is Futile!

For anyone interested in joining us, as a navigation topic of interest, I have arranged a demo of the USN Stella software that many of you have heard of (we'll do that starting at 5pm). This is also, of course, the weekend of my "Celestial Navigation in the Age of Sail" class (formerly "19th Century Methods") which runs 10a-4pm both days, and if any of you have put off doing that on previous occasions, that's another reason to come to Mystic Seaport (details and online registration: http://www.reednavigation.com/c19-class/). Plus, let's not forget, Gary LaPook will be in town! 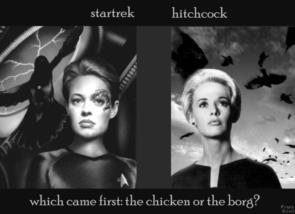