If the goal is really navigation, then just use visual observation of low-altitude satellites, like the ISS (International Space Station). I have brought this up a number of times in the past ten years. By using nearby objects against the distant background of the celestial sphere we eliminate the need for the horizon or vertical and also we no longer need angle-measuring instruments like sextants. Isn't it time to stop fighting the last war? We don't need an enhanced sextant. Not on the oceans in the year 2017 nor ten years from now on the the surface of the Moon or Mars. A human-centered system and even more so an automated system can observe the positions of nearby satellites against the background stars and quickly, accurately determine a position fix. If you want to go beyond traditional celestial navigation, then go beyond it. There's a lot more to see in the sky now than there was sixty years ago!

So why don't people do this? First, it hasn't been converted into a complete system. There's no kit for it the way there is for traditional celestial navigation --not yet. Second, it's not always as easy as it with the ISS, so a purely visual system is helpful but not "always on". Third, somehow it seems almost too easy and seems to lack any "technique" to be learned, which I think many navigators find disappointing. Fourth, it requires recent access to a computing device as well as a few hundred bytes of Internet data (but unless you're preparing for a true apocalypse, this shouldn't be a problem). Fifth, on the Earth, in the troposphere, it's weather-limited like standard celestial navigation. Sixth, it demands a different level of familiarity with the constellations (at least in its non-automated form), but maybe that's a positive! And finally, for now, it's easy to see that it's more effective with the human out of the loop. This sort of navigation is ripe for full automation.

Below are charts for the ISS over southern New England tonight in about 45 minutes: one view for 41.5° N, the other for 41.6° N, with the longitude fixed at 71.3° W simply for this example. In case it's not immediately obvious from the coordinates, the bright star at the center is Polaris. The path among the background stars is shifted up by nearly a full degree from a tenth of a degree change in latitude. A casual observer with minimal training could readily determine latitude within a mile using only these charts and a pair of binoculars. 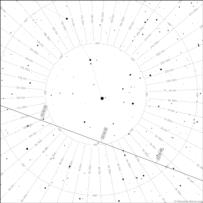 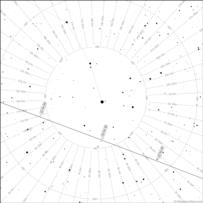