My name is Dick Pratt.

A life time water rat grew up around boats and boatbuilding. Built my first boat when I was 12, and built a boat every year till I was 31, totalling 19 sailboats & one transom sterned power dory. I also restored two '26 T-Birds and a dozen sailboats from 23'-41'. In the 90's built five kayaks of various designs. I also started racing sailboats as a youngster and later in the Navy. Most of my racing since my Navy days has been local Northwest PHRF and IOR Racing in the 70s & 80s, PHRF racing the last 18 years, and 6-Meter racing and one design racing in various one design fleets here in the Northwest.

My wife, two elest children and I lived aboard and cruised a 38' Columbia after my active duty in the service time for a few years. Then lived aboard and cruised a 41' CT Pilot House Ketch. We eventually bought land on an old ranch and built our first home. Taught all our six children sailing and coastal navigation & piloting from an early age. Rather then go with bigger boats again, we kept a fleet of smaller boats. Two Ranger 23s, a Ranger 26 and a Ranger 28, thus allowing all to have hands on experience for running their own boats, racing and cruising in company. My three sons went into careers working on the water. My eldest son in the Coast Guard and just finshing a 20 year career. My middle son followed my career in marine construction. My youngest son is a fisherman during the fishing season and works marine construction during the off season. My middle daughter spent 10 years coaching sailing for Conneticutt U. in New London. Then took on head sailing coach duties for Vanderbilt for two years, then coached the Anguilla sailing team in the British Virgin Islands for two years. My youngest daughter, her husband and kids are a boating family, and lived aboard and cruised a 44' power boat, till buying a home and moving to the land (they still have three boats and enjoy recreational boating.) Only my oldest daughter lives to far from the water in Phoenix, and doesn't get to spend time on the water like she once did. However when she visits the NW with our grandchildren in the summer, spending time on the water is a given.

Recently my youngest son who recently turned 30, re-expressed an interest in learning celestial navigation. About 10 years ago he expressed an interest in learning CN as well. However I put him off on it and said it would be best if he just carried some GPS backups onboard. A water rat like his dad. He spends a lot of time on the water on our boats and.  He runs a '96 fishing tender in the summer out of Port Muller, AK, then does the Bering Sea King Crab Fishery in the fall, and the Opie Crab Fishery in the Bering Sea in the winter.

Anywho...pulled the old sextants out ( a US Navy Mk II and a Kelvin,White & Hutton vernier), dusted them off, checked and did a minor mirror adjustment on both and started practicing daily since. Last week purchased a 1988 Freiberger Drum Sextant for my son to practice with. Luck be with us, will find him a decent C. Plath at a reasonable price, soon. However, an Astra IIIb would be fine, too.

Well there's my brief introduction, however, missing much in detail. BTW, I found this site by chance, but found it quite interesting.

A recent pic after delivering Defiance a 58' Purse Seiner to Cordova. I'm the gray haired fellow on the right wearing overalls. 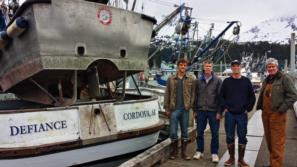 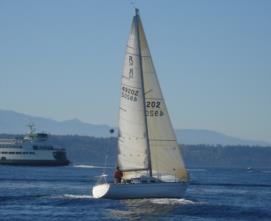 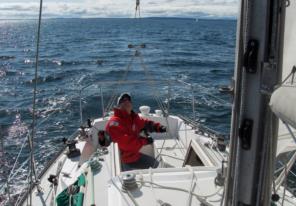