A negative leap second is possible, but even if current trends continue it's unlikely that this would be recommended any sooner than ten years from now, and that's being generous. The current pattern does mean, however, that there may also not be any "normal" leap seconds for quite a few years, even more than a decade. Would that be a problem for computing systems? Possibly. Out of sight, out of mind. This may be an excellent opportunity to jettison leap seconds.

As shown in the graph below, borrowed and modified from the wikipedia article, the value of DUT is currently rather close to zero and not trending strongly in either direction. The trend has been rather fast downward for decades (the upward strokes in the graph are the individual leap seconds inseerted in the calendar). This is unusual, but from a practical perspective, it's a nice place to be. We can usually ignore differences between UT1, which is based on earth orientation relative to the celestial sphere, and UTC, which is fundamentally the result of the steady, unchanging "ticking" of atomic clocks, when it is less than half a second. In my GPS Anti Spoof app, the difference is set to a constant -0.2 seconds for the next twelve months. No greater accuracy than that makes any sense. By international agreement, any difference is supposed to be nulled out by leap seconds if it is predicted to grow greater than 0.8 seconds (at least if I remember correctly, that's the limit). 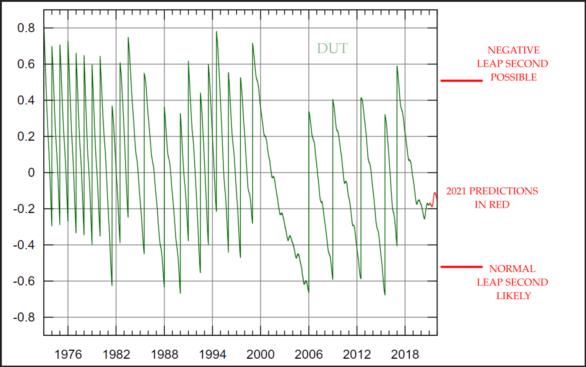