Reply
Re: Navy wig wag
From: Lu Abel
Date: 2016 Aug 10, 05:59 +0000
The Navy semaphore alphabet is actually quite clever and simple.   Note, for example, the letters A through G.   You see one flag held at the signaller's feet and the other one moves in 45 degree increments as he goes through those letters -- first his lower right, then straight out to the right, then upper right, and so forth.
Then the next group with a flag out to the right.   Etc, etc.
Not sure why "J" is an oddball signal.

NMI
AFW that wig wag is Semaphore. Or is it Flag Morse? See the attached scans.
This is not how the model verb was meant to be used but I think that what I have written makes sense (without a qualifying verb).  I had difficulty writing this message in terms of the code. I would have had to prefix my message with UH.
I can understand the need for codes related to infectious diseases but BDC seems an interesting inclusion. I suppose that signalling would have been codified too late for Bligh to signal RY?
Attached File: 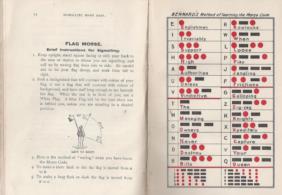 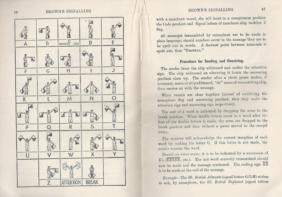