Making the (unjustifiable) assumption that the above given altitudes were correct, plotting the altitude position lines gave a 3 position line fix, making my first inspection answer N41° 52.4’ W087° 25.2 at 18:35:17 UT.

By refining the assumed position and time to the above values, my crystal ball advanced the lunar distance time by 1 second, moved the lunar line of position 0.6nm further North (red arc on Image 1) and the longitude by 0.1’ West. So my third inspection answer, based on the given lunar distance and mean altitude measurements,  is N41° 52.6’ W087° 34.5’ at 18:35:16. Image 2 shows this position as a red cross, together with the three 18:35:16 position lines.

That is about 2 miles offshore! The NavList header photograph shows the waterline of the tall ship well short of the horizon, so it must have been taken from a significant height. Obviously not from the topgallant yard of an even taller ship, but perhaps from the roof walk of the planetarium?

In this body aspect, an error in LDs of +/- 0.1’ gives a time change of -/+ 9 seconds and a South/North displacement of 8.3nm in the lunar line of position (for the same body altitudes). Errors of 5’ in the Sun altitude values give around 7 secs time change or nearly 2’ of longitude. Similar changes to Moon altitude have less than half that effect on longitude. 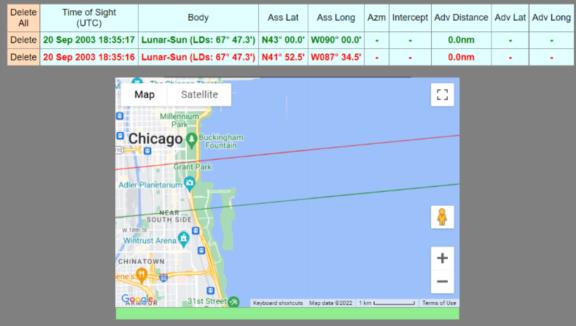 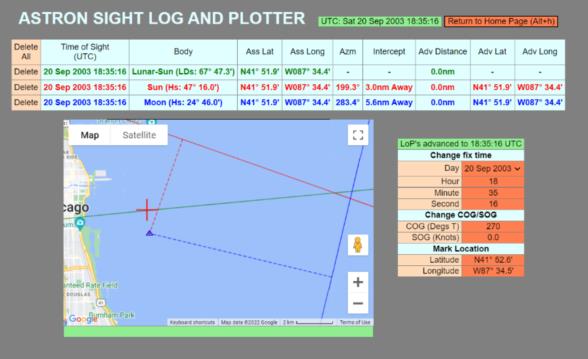