Yes, there are a couple of navigationally significant aspects to your photo. But before I go further, nice photo! It's challenging to shoot a good-looking lunar eclipse photo. 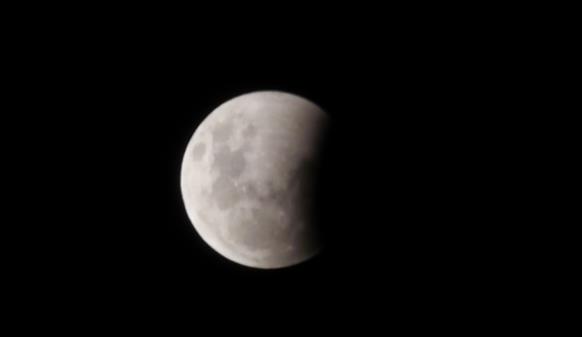 Much more significant, the photo gives the "Holy Grail" of navigation from three centuries ago -- it reveals the absolute time! A lunar eclipse is an astronomical chronometer. It lets us read, in an approximate fashion, the lunar distance from the anti-Sun point which is at the center of the Earth's shadow. From your photo I estimate the time is about 10:06 UT/GMT (I hope I have that right... I looked at your photo and compared it with predictions yesterday and I'm recalling the time that matched from memory). That time is probably accurate to the nearest minute or three. When did you actually shoot this?

With that absolute time, we could get your longitude, but that would require another photo or a simultaneous sextant observation. We need your local apparent time. The difference between absolute time and local time converted to degrees at the usual rate of 15° per hour would then yield your longitude. And if the absolute time from the lunar eclipse is wrong by a minute of time, then the longitude would be wrong by 15 minutes (15 angular minutes of longitude) and in your latitude this would amount to an east-west error of about 12 nautical miles (that's 15'·cos(41°)), and you can see that far from the mast of a medium-sized vessel. So not bad at all!

Do I understand correctly from your follow-up post that this is your first lunar eclipse? Yes, they are always over-hyped in the internet era, and yes, they are as reliable as "clockwork" :). The "red moon" or "blood red moon" phenomena are exaggerated for "clicks" in the endless stream of hyping on top of hyping that we suffer from today, but under good conditions deep lunar eclipses (which this one was not) do display a nice red tinge. Beware any hype of penumbral lunar eclipses. These are essentially non-events visually. Partial and total lunar eclipses in which part or all of the lunar disk have entered the Earth's full shadow or umbra are worth your time.