Paul Dolkas, you wrote:
"a whistle could have easily saved her life. You can blow three short blasts all day long and not get too tired doing so – and some of those things are incredibly loud."

She had one. Several sources agree on this, and I assume that it was one of those exceptionally loud whistles designed for hiking emergencies (see PS). I don't know this for sure, but given that she went through a serious Appalachian Trail training course, I have to believe that she was adequately equipped. The fact that Gerry Largay had a whistle makes her death all the more puzzling and tragic. Searchers passed very close to the tent location immediately after she was reported lost. I estimate within 300 feet (and again somewhat later with canine units at a range of perhaps 100 feet or less though she was probably dead by then). There's no question that a whistle would have been heard even among the dense trees. Was she injured? Had she moved from some other location which was not near the search paths? Or was it just bad timing, awful luck, Fate...

Noell Wilson, you wrote:
"The story of the lost woman is here: [link to nbcnews.com]"

Of course, this may sound like stating the obvious, but what you have there is "a" story of the lost woman, not "the" story. There is considerable variety in the media coverage. There are many clues in this story, and also many puzzling gaps. But naturally there is no shortage of folks willing to make declarations about what "really" happened. Many news stories assembled definitive "just so" stories which make it all seem so obvious... 'she was too dependent on technology'... 'she was an incompetent hiker'... 'she had mental issues'... But these stories are not generally supported by the evidence. This woman was not some crazy kook who needed to be on her meds (as several stories imply) and there's no evidence she had no sense of direction. She had hiked nearly the entire Appalachian Trail and had years of prior hiking experience. Her sometime hiking partner suggested she had a poor sense of direction and sometimes got confused on the trail. A hiking partner has a unique perspective, and in a pair, there are always complaints. It's not objective information.

The best media coverage I have found comes from a Maine newspaper, the Portland Press Herald. For Maine locals the search was personal. There is considerable coverage from the beginning of the search up until the release of the final report a couple of weeks ago. This article includes a couple of maps. Using the search map there I have been able to pin down the location better: 44.9834 N, 70.4019 W. This is about 250 feet nearly due west from the location I posted previously. There's also an interesting video from the Press Herald here. The Press Herald's most recent article details Largay's final days as best they can from the final investigation of her belongings and journal.

I tried to find some photos of the woods in this area. There are a handful online, and it's clearly dense forest with craggy rock outcrops and steep drops. I read one article describing a hiking daytrip in this area which explained that prospective hikers do not have to worry about getting lost or getting off-trail because the woods are impenetrable. Simple as that -- impenetrable! So how dense is the foliage here? How rough the terrain? This section of the Appalachian Trail is widely regarded as one of the most extreme and most difficult. I found a blog entry by some hikers who did some trails hiking Mt. Redington, within five miles of her tent probably not very long after she died. Here's the article and some photos.

Let's get back to navigation. Would a common GPS receiver function in such dense foliage? Presumably not. Yet she surely knew that she had to seek clear sky for reception. Did she run down her batteries in an early panicked phase of being lost? She tried to text her husband for two days straight. Her phone had power and could have provided a GPS fix. Was she equipped with mapping apps that could function off-network? Did she know she would need to wait up to three minutes for a GPS fix when off-network? I do believe that these skills are taught to many hikers. Did the school she attended discuss these issues? And what about a compass?? Would a compass really have done her any good in a circumstance like this? If you're lost in dense woods, what good is it to know where north is? Isn't it always best to follow the drainage from streams downhill to rivers?

In the attached map, you can see that the terrain here is relatively steep. Her final campsite is an area with a roughly 12% grade and just west from there the slope is 30% or higher. On this map, I've roughly marked the Appalachian Trail in this area in blue. It appears to match the maps from the investigation reports, but bear in mind that I have based this on the AT in Google Maps, which is not definitive, and also bear in mind that the trail is frequently relocated so this may not reflect the location in the summer of 2013. The red boxes mark areas with houses and other structures. A little over one mile west of her final campsite is a small group of buildings with cleared land south of the west end of Redington Pond, and about two miles northwest are buildings and a parking lot at the end of "Navy Road" which I assume are part of the US Navy survival school which operates here.

PS: There is a comic moment involving one of those hiking whistles in the movie "Wild" (which is a good film in the "spiritual rebirth" genre starring Reese Witherspoon hiking the Pacific Crest Trail from the Mojave to the "Bridge of the Gods" on the Columbia River --which I visited a few weeks ago for an entirely different reason). Our heroine freaks out in her tent on one of the first nights thinking there is a rattlesnake in there with her, jumps out in panic, blows her whistle hard leaving her ears ringing for a few minutes, and then discovers that the "rattler" was a caterpillar. 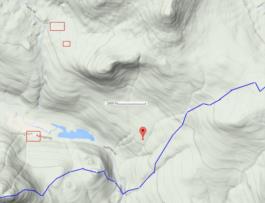