I learned by following a link in the Wikipedia article on the Hermes airliner that this navigation failure and resulting crash in the Sahara in 1952 was the subject of an episode of a BBC documentary back in 2003. I could not locate a full copy of the documentary episode (there is a teaser posted on youtube), however there is a nice little web page that was prepared for the program here. There are some interesting photos of the aircraft on the ground. It's similar to a DC-6, so a rather substantial aircraft. As noted in one of the captions, "The 4-engined plane carried a crew of five on the flight deck, and three in the cabin. Considered the height of luxury at the time, this aircraft was designed to carry 40 passengers, but on the flight in question, between London and Accra, in Ghana, there were only ten." According to the documenatry, as of 2003, it appears that the fuselage and most of the aircraft had been buried by the shifting, giant dunes of the Sahara.

The leg of the flight which ended in near-disaster, originated from from Tripoli, Libya with an intended destination of Kano, Nigeria. In the attached simple map, derived from the accident report, you can see how wildly off-course they were.

It seems incredible that such a massive navigational error could be made, but it all hinges on being alert to the possibility that we are totally wrong; a lesson which applies no less today, after several generations of technological changes. Years of experience and skill can work against a navigator, seeding not merely over-confidence, but internally unchallengeable confidence. That's the danger. A navigator, or an analyst in any field, has to step back, step way back, and ask, "could I be totally wrong?" When we fail to step outside ourselves... and remember to see ourselves as potential fools, we screw up! 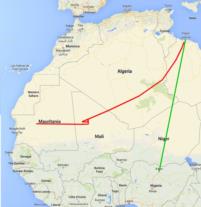