Alex Eremenko, after I edited your message to make it readable, you wrote:
"Thanks for editing my message, but frankly speaking I do not see why there was a need to do this."

I know you don't, and I know you don't realize how old-fashioned your approach to email is, but you should understand that your message would have been an illegible mess if I had not edited it. Simple as that, and you don't owe me even one thin dime for cleaning it up! Good deal, right? :) I could tell you to adjust your email software, settings, and tools, but you're hardly the only NavList member who stubbornly insists on using email settings from an earlier century. And besides, dealing with those little nuisances is part of my job, isn't it? :)

Since I posted screen captures of pages from the book, you wrote:
"I also wanted to post a scan of 2 pages of the book, but then recalled how angry you were when I suggested posting some pirated text on this site"

That deserves an answer. The difference here is that the author, Julian Stockwin, has made available large portions of his novels as samples via Google Books. About 20% of this novel, Quarterdeck, is available. Many authors, especially of works with specialty markets, have realized the marketing value of free previews in Google Books. They are like creators of software who provide a free sample with limited features, to serve as a teaser. Stockwin is freely choosing to post portions of his novels to sell more copies. This is quite a bit different from links to pirated editions of works covered by copyright. I hope that's clear.

By the way, I'm including below another screen capture from the Google Books edition of this section of "Quarterdeck". That's quite a thing he says: "the Moon was never used for navigation". Never used! The novel is set around 1800, and surely anyone with even basic navigation knowledge would know that the Moon was the raison d'etre of the the Nautical Almanac in the late 18th century. Merely flipping the pages of the almanac would reveal that the Moon was critical to navigation (at least on paper). But as I mentioned in my message to Geoff, we all know that this isn't some sort of manual of navigation or even a realistic portrayal of historical navigation, and I'm not suggesting it's any serious issue.

In the real world c.1800, how would a clever mariner with some insight and basic knowledge of navigation know the Moon's compass direction in fog shortly after sunset? I would say that the most likely, realistic answer is by memory from the previous night. For the basic task of rowing back in the general direction of their ship, this would be more than sufficient. Only a gross estimate, +/-20 to 30°, would be needed. Or just as likely by knowing that this is always where you find the Moon at First Quarter. It's been seven days since New Moon, so it's First Quarter, and we will see the Moon in the south (in that latitude) not long after sunset. Calculation? Un-necessary and very low accuracy in any case.

Source of inaccuracy in the implied calculation:

Note that none of these sources of inaccuracy would amount to much of anything if we only need a rough compass direction, +/-30° as I suggested above. But then in that case, the computation is un-necessary from the outset. Nothing is gained by this imaginary calculation.

You asked in a later post if any modern navigator could estimate the Moon's position to the nearest degree without consulting an almanac. I would say that the task is impossible, even at +/-5° position accuracy, unless you have memorized a significant portion of the almanac data or a specialized set of equations for the time period in question. There are no short, clever tricks to get the Moon's position without tables. 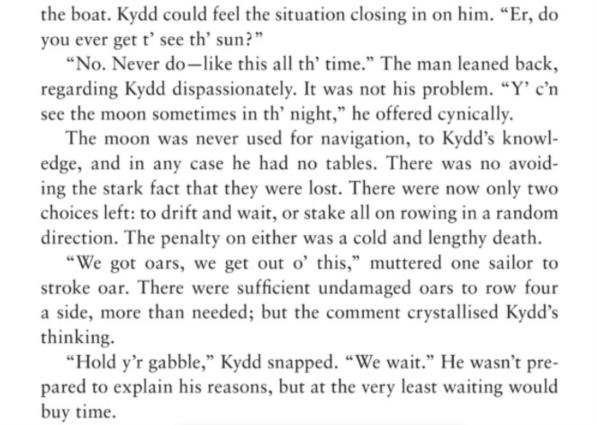