Geoff Hitchcox, you wrote:
"The average of these 14,000 transits is 50.47 Minutes - and this should ring a bell with anyone who has a (non harmonic) Tide Clock - whose hand takes an extra 50.47 Minutes ( 50 minutes 28 seconds ) each day to rotate twice compared to a standard clock."

I agree, and I think this is critical to understanding why this number is in the book.

The author is not trying to describe realistic early 19th century navigation methods. Even in the context of the era this setup is a rare event and an unlikely solution. But in any case the book is not a resource on navigation, and there's no reason to expect it to be a reliable resource on navigation history except in rather broad-brush terms. It's a maritime adventure novel, and the goal of including that familiar number is surely to resonate in the minds of his readers, even flatter his readers' knowledge. Make them feel good, and they will come back for more!

Novels with technical underpinnings like this one are usually written with just enough salty jargon and just enough maritime science to give a reader that feel-good familiarity, and a certain basic knowledge of the tides is high on this list of likely knowledge. Even readers whose knowledge of the ocean is limited to knowing the best time to go poking around in the mud for quahogs will have learned, even as a child, that the tides are 50 minutes later each day and would understand the idea of the Moon arriving roughly 50 minutes later to the meridian each day. Why 49 and not 50? I'm sure it's nothing important, and maybe it's just a bit of lore then the author memorized at an early age. It's close enough! A reader of his novel encountering this story with its magic number will say aloud, "aha! that's clamming knowledge used for navigation! I could do that!!"

Is this actually a good way to estimate the Moon's meridian passage? No, it's pretty bad, but it's not awful! And with nothing else to go on, it's conceivable that it could save the day in just the right scenario, when the Moon is barely visible in a thick fog and there is nothing else to go on, as in the novel.

Thank you for creating that graphic of meridian passage time differences. It's a wonderful thing to contemplate! For anyone who missed it, I'll copy and paste: 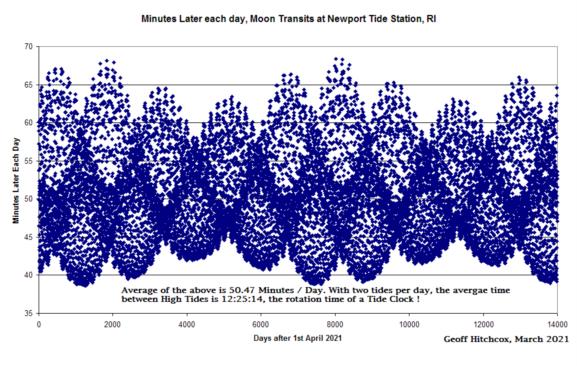 Lots to see in there!