David, you wrote:
"Gotta get this if it's not too expensive."

For Windows 10, the product itself will probably be priced around $50-$100. For Windows, this will require a high-end gaming system, which most NavList users do not own. One could acquire a PC gaming system or an alternative is to get an Xbox system, and for the expectations of the new MS Flight Simulator, that would run about $250. So maybe $300 total.

I've been reading about the tech underlying this, and the limiting factor for most people is probably going to be internet bandwidth and its price. This shouldn't be as bad as streaming video, which is typically about a gigabyte per hour for high-def video, but I would not be surprised if it's as high as 300-500 megabytes per hour. That adds up quickly with an addictive toy like this.

By the way, for Jim and David both, yes, the Millennium Dome or O2 or whatever it is now, was a key clue there at the intersection of Thames and Prime Meridian. Similarly in Orlando, the Amway Center (which is conveniently written on the roof!) helped identify that city. In Greenwich, the old Royal Observatory itself is visible in the simulation at timestamp 5:12 and Cutty Sark is there about four seconds earlier. Cutty Sark does not appear to have masts. I suspect that's a case where the photogrammetry simulation engine collapses in a heap sobbing... and gives up.

There's a genuine, modern navigation story here, too. Suppose you have photos taken by "field agents" and you need to identify the location. Or suppose you're an "operative" who has been dropped with your smartphone or similar device in some unfamiliar country, and GPS signals are being jammed, and you're lost. How can you determine your position? One way (and this is real, and it's generally known to be in use by the world's intelligence services and militaries) is by constructing three-dimensional simulations and generating pseudo-photos that can be compared in automation against actual views, whether in photos transmitted remotely or direct from the camera view of the device. For example, it's possible to compare the undulating patterns of hills and mountains generated by simulation against the actual backdrop of hills and mountains seen on the ground. Or the sawtooth pattern of buildings in a skyline, even in a rather small town or city, can be compared against simulated patterns. Processes like this can generate a visual fix in a minute or two. For a basic sample of this capability, have a look at this app: https://www.peakfinder.org/mobile/.

By the way, it appears to me that Microsoft and their sub-contractor Asobo Studio have shown their hand in a big game of poker. This 3D simulation is demonstrating the enormous capabilities of the Bing Maps database and its generation of full 3D models. Google worked on this for some years, but it's another one of many projects that they dominated and then set aside. It appears that Microsoft has blown their socks off. In the images below, I've compared the 3D view of Orlando generated in Google Earth with a similar view in the video of MS Flight Simulator. Microsoft has something very valuable here, well beyond the resurrected Flight Simulator. Another impressive achievement under the leadership of Satya Nadella. Buy, buy, buy (and I don't mean the game!).

PS: One more puzzle? What's that spherical structure down to the left at 4:13 in the video? So we're watching a video... of a virtual simulation... of a virtual... Ouch. 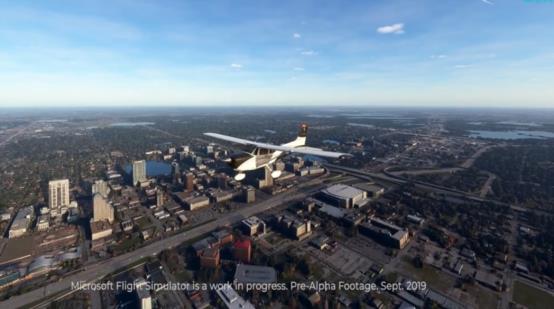 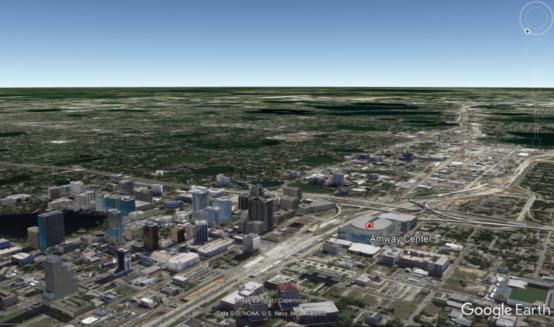