I got an email from a NavList regular a few minutes ago wondering about NavList email delays. This has been caused in recent weeks primarily by gmail but other email services may be having similar issues with bulk email like NavList. This issue with email is one of the reasons that I tried for sometime to convince you all that you should stop thinking of NavList as a "list" or at least stop thinking of it as an email list. Email lists are old tech, and the big services would love to shut them down completely. As some of you recall, this is why NavList messages no longer originate from the email of the individual sender. It's also why replying to a NavList message with the "send private email" option sometimes doesn't work. These services (gmail, aol, others) several years ago stopped accepting indirect emails. It was a going-out-of-business event for many olders email lists.

About half of NavList regulars interact and post messages through the message boards at http://fer3.com/arc and never see any emails, and if possible you should all do that. I also strongly encourage you to sign up for the NavListNews Twitter feed, which currently has 54 followers. If you have never used Twitter and you're worried it will expose you to the Wild West of tweets that you hear about in the media, rest assured that you only see what you choose to see (plus a small number of ads). In addition, you can follow the NavListNews Twitter feed without signing up: https://twitter.com/NavListNews. This doesn't have much added value compared to visiting the NavList message boards directly, but it may be a good way to get used to the sort of interaction you could have using Twitter.

When a NavList message appears on the message boards, a tweet is automatically sent (thanks to my amazing code!) within one minute to Twitter. This tweet contains the subject and author info, a link to the message back on the message boards, and a thumbnail of the message for your instant visual review (you can quickly spot whether a message might have interesting photos or diagrams or other attachments, and you can also usually see if a message is just a short "thanks" or similar). If you are signed up using a Twitter app on your phone or you're receiving desktop notifications on your computer, you'll get these tweets within seconds. This is always faster than email, and of course it doesn't clutter up your email inbox.

The images below illustrate the Twitter page for NavListNews in its normal desktop appearance, and also there's one sample thumbnail preview of a NavList message. 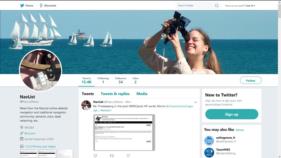