Ed Popko, you wrote:"What's the story behind the NavList banner. Every time I tune into the NavList site I'm greeted by this cheerful lady who appears delighted to be taking a lunar. And those lovely ships in the background, all headed somewhere I would probably want to visit."
The photos were taken in the middle of the afternoon on September 20, 2003 which was about ten weeks before I joined NavList (back then it was the Navigation-L mailing list). The lunar distance then was about 67° with the Moon low in the west. The young woman is my good friend Heather C. (girlfriend back then). She was getting a kick from being photographed perhaps more than from shooting lunars. In the additional photos from this event, attached below, you get to see Heather making a studious face, me making a perturbed face, and finally a photo that reveals the location. From alignment of landmarks in that photo, you should be able to work out our location within a hundred feet or better. As for those vessels sailing in the distance, they are heading nowhere at all... just day-sailing for tourists. The four-masted schooner is named Windy.
Frank ReedClockwork Mapping / ReedNavigation.comConanicut Island USA
Attached File: 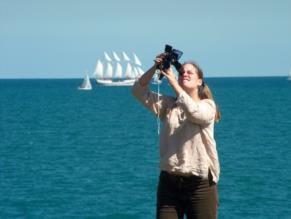 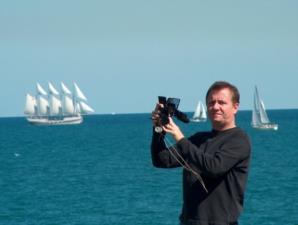 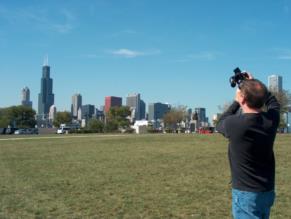