"This is a bit of intense deja vu from the Northern Territory of Australia. Douglas, Bosham Church, been there 100s of times, is magical as is its connection to the Bayeux Tapestry, that Saxon Chancel arch... Sorry its not strictly navigational but...."
--------

You are welcome. Bosham is quite cold now as winter approaches. Not like Darwin no doubt.
Others please excuse this diversion for Mike's sake...
------

Bosham church is about five minutes walk from my house. I walk to the harbour and past the church almost daily. There is a modern burial flagstone of marble with the crest of a raven on King Canute's daughter's tomb under the Chancel Arch which would make a nice tombstone rubbing.

The church and Bosham was the base for Harold Godwinson or Harold II the last Anglo-Saxon King killed at the Battle of Hastings - not as popularly believed by an arrow in the eye, but by being hacked to death. A local historian John Polling, who lived a few houses away from me and who I knew quite well had made a long-term study of Harold and published a paper with the strong evidence that he is actually buried in Bosham church and not as previously and popularly accepted in Waltham Abbey, (North of London).
I was most surprised to read of this in Wikipaedia which quotes:-

COPY:
Harold's strong association with Bosham, his birthplace, and the discovery of an Anglo-Saxon coffin in the church in 1954 has led some to speculate that King Harold was buried there. A request to exhume a grave in Bosham church was refused by the Diocese of Chichester in December 2003, the Chancellor ruling that the chances of establishing the identity of the body as Harold's were too slim to justify disturbing a burial place. A prior exhumation had revealed the remains of a man, estimated at up to 60 years of age from photographs of the remains, lacking a head, one leg and the lower part of his other leg, a description consistent with the fate of the king as depicted in the Carmen. The poem also claims Harold was buried by the sea which is consistent with it being at Bosham Church which is only yards from Chichester Harbour and in sight of the English Channel.
ENDS.

There is another connection with Waltham Abbey (North of London) which I find interesting as well as Harold's supposedly being buried there. My own family name is strongly associated with the Abbey.
After the Battle Of Hastings, William the Conqueror took away the land and endowments from around Waltham Abbey of which Harlod was associated; and much later, it was given to the son of King Henry VIII's most trusted courtier Sir Anthony Denny This was Sir Edward Denny.

From Wikipaedia. Copy:
"Sir Anthony Denny (16 January 1501 – 10 September 1549) was a confidant of Henry VIII of England. Denny was the most prominent member of the Privy chamber in Henry's last years having, together with his brother-in-law John Gates, charge of the "dry stamp" of Henry's signature, and attended Henry on his deathbed. He also served as Groom of the Stool. He was a member of the reformist circle that offset the conservative religious influence of Gardiner. He was a wealthy man, having acquired manors and former religious sites through the Court of augmentations. By 1548 he was keeper of Westminster Palace.

Anthony Denny was the son of Sir Edmund Denny, chief Baron of the Exchequer. He was educated at St Paul's School and St John's College, Cambridge.
Along with the Edward Seymour, Earl of Hertford, John Dudley, Viscount Lisle and Sir William Paget, Denny helped to finalise Henry VIII's will upon his deathbed in 1547. Denny specifically argued to Henry on several occasions against the removal of Stephen Gardiner from the will. Denny was himself the man to tell Henry of his coming death, advising the old King "to prepare for his final agony". Denny's position gave him both the power to control who saw Henry in his last years (in which he spent excessive time in the Privy Chambers), and influence through his personal relationship with the ageing King. Along with Sir William Paget, the Principal Secretary, Denny is suspected of having fixed the choosing of the "Progressive" appeals, headed by Edward Seymour. ENDS.
------

I have no idea if I am related to Sir Anthony Denny, the Groom of the King's stool, (i.e. he was on charge of King Henry's chamber pot!

In Waltham Abbey is a stained glass window given by teh Denny family in the Denny Chapel; here it is:
Also here is a picture of Bosham Church in the snow last year, which is highly unusual as we don't have snow on the south coast of England often at all.
--------

I hope this little diatribe is of interest to you Mike as you have happy memories of Bosham church. Apologies to others.

It is perhaps worth mentioning, there is a navigation aspect though: in Bosham church is a depiction of part of the Bayeux Tapestry (Normandy, France) which has detailed pictures of the Anglo-Saxon sailing ships which Harold used to sail to France in the era of 1060. 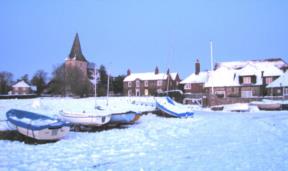