Details: The tool (web app) for producing lunar distance tables on my web site is FREE and includes numerous customization options. For example, you could generate tables for January 1, 2017 for every hour of Eastern Standard Time for every navigational planet and navigation star, including only those that in sextant range and visible from your own backyard. My tables have been capable of displaying lunar distances for the year 2015 since 2004. Tables can also be generated for historical dates back to the earliest period (that is, back to the mid-18th century, the earliest period when real lunars were used). Go here: http://www.reednavigation.com/lunars/ and click on "Predicted Lunars".

As for Steve Wepster's tables, he has put relatively little effort into them apart from "turning the crank" every few years, and it shows. His tables frequently have errors of a tenth of a minute of arc. A quick comparison of his tables against mine will show many examples of this. A tenth of a minute of arc is usually nothing to worry about --EXCEPT in lunars. The calculating engine underlying Steve Wepster's tables was written in the 1990s. Notice also that his tables do not include the Moon's HP which means that they cannot be used without access to a current Nautical Almanac. It's certainly nice of him to make these tables available, but I can't recommend them. Why put up with something inaccurate when plenty of accurate options are available? If you want something besides my tables, Paul Hirose also has excellent tools for lunars, and Andrés Ruiz has already described his excellent software.

Incidentally, calculating lunar distances is exceedingly simple today with three potential pitfalls. First, one should not be calculating the Moon's position algorithmically, as the engine behind Steve Wepster's tables is doing. The position of the Moon is a known quantity many years into the future thanks to the JPL numerical integrations which have been widely available since the beginning of this century. The Moon's position can be generated by a simple lookup into a database derived from the JPL data. Second, for future lunars tables, some estimation of delta-T is required. But it should be noted that lunar distance tables suffer less from inaccurate values of delta-T than tables of navigation data in GHA format. Any software should be able to estimate future delta-T some years ahead within 3 or 4 seconds which would yield an error of considerably less than a tenth of a minute of arc in lunar distance tables (12 seconds corresponds to 0.1' in lunars generally). The third potential pitfall is the accurate long term calculation of the positions of the stars. Many very good astronomical software products trip up on this one. After those three issues have been properly dealt with, the actual computation in the end is very simple. You get the accurate position of the Moon and some other celestial body for some instant of time (in any geocentric celestial coordinates) and then do a straight forward great circle distance calculation. For coordinates, ecliptic latitude and longitude are generally most convenient, but GHA and Dec would work fine, too. The great circle distance is not affected by the choice of coordinate system. 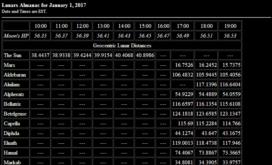