Last night I was poking around my spare room looking for some old nautical almanacs from different countries which I collected many years ago as I ponder the issue of international star name pronunciations and collect curiosities like that "obscure" star listed in the British nautical almanacs c.1920.

While I was digging I came across a couple of books by Jean Meeus, also bought years ago. He wrote several books with variations on the title "Mathematical Astronomy Morsels". Each is a series of brief essays arranged into various topics mostly with significant mathematical analysis. Good fun, right? This is just the sort of thing you'll enjoy if you're a NavList sort with a particular interest in the astronomy side of the subject. And I thought to myself, "Oh I haven't looked at this in years. I'll just crack open the cover and have a look at the table of contents". And in "Mathematical Astronomy Morsels III" I see that article number 52 is entitled "More Sunshine near the Polar Circles". Well, of course! I'm attaching a quick photo of a single page from the article to give you all something to chew on (without giving away the whole essay).

Now you want your very own copies of these "Morsels", don't you? They were formerly published by a little company called Willmann-Bell. The owners have recently retired, and the business is closed. You're too late! No morsels for you!! There are a few copies of the original "Morsels" (Morsels I) on abebooks and ebay, at relatively high prices. There are no copies of "Morsels III" on abebooks.com or on ebay. There are two copies listed on amazon.com both with an asking price of $668.93 ...which is not a real price. 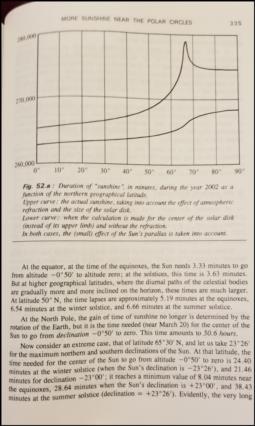