There's an opinion piece in the NYTimes poking a little fun at the press coverage of this story, as well as the attention it has drawn in the "penumbra" of the press. The real point of the letter is to remind everyone that there are real things to worry about, and this magnetic field update is nothing:
https://www.nytimes.com/2019/02/07/opinion/north-pole-gps.html.

There's one common misconception in the article --a misconception which also afflicts many navigators! It states that a compass points to the magnetic pole. This is not true. You can try it easily enough yourself. Take your local magnetic variation, plot it on a globe, and then extend that as a great circle toward the poles. It passes somewhere near the magnetic poles, of course, but it's only very crudely in the right place. Try a few other locations on the globe... A compass aligns itself parallel to the local magnetic field lines (the curves in the attached map). Since the Earth's magnetic field is only approximately a dipole, like a common bar magnet, those lines are only approximately aligned with either the magnetic poles (where the field is perfectly vertical) or the geomagnetic poles (where the lowest order dipole approximation has its theoretical poles).

By the way, when I first visited the article, the advertising algoritm offered me a product a few paragraphs from the end: a toy gyroscope "spinner" basically identical to the one that David Pike posted about earlier today. This is the sort of coincidence that gets people paranoid about online advertising. Heh. This is also why faith in technology is at such a low ebb. That's good for celestial navigation education though. Both of my classes in Boston sold out weeks ahead. 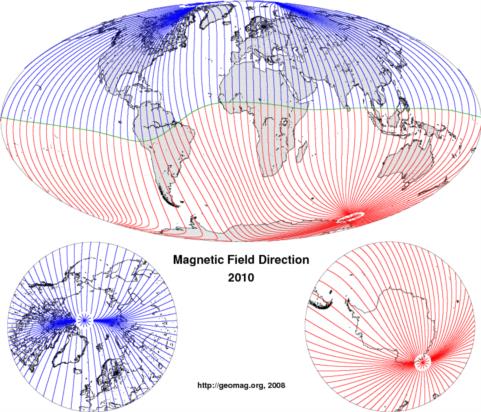