From an image caption in the article:
"A changing magnetic pole will require repainting the headings on airport runways."

That's crazy, huh? No wonder this new magnetic model is such big news. If you skim the article, you would get the impression that they might have to re-number all the world's airport runways thanks to this new magnetic model. Of course, that's because the article is poorly-written. In general, the NY Times has a well-deserved reputation for journalism of the highest quality, but this has never been true of their science reporting. There is only a trivial connection between runway numbers and the small adjustments to the magnetic model that is the primary focus of the article.

Runways are numbered at each end by their compass heading to the nearest 10° and opposite ends are separated by 180°. So a runway numbered 12/30 heads toward 120° compass bearing in one direction and, naturally, 300° in the opposite direction. Over the course of years, those bearings change if they are based on magnetic heading. Then the airport documentation gets updated, and the numbers change by +1 or -1. This is a low priority activity, and it has only trivial navigational significance.

Make you wonder though, doesn't it? Why base the numbers on magnetic bearing at all? Aviators understand true compass bearing. If they numbered the runways by true bearing, then they would never change. Of course, this is a classic case of an up-and-running legacy system. In the early days of aviation, magnetic bearing was a key parameter and we're stuck with it unless someone can make a really good argument for better efficiency or safety to change the system.

But what about in the high Arctic? They must have to update their runway numbers all the time up near the magnetic north pole. So maybe the article has a point after all?? No, because runways can optionally be numbered by true bearing, and that's just what they do in the high Arctic. The airport at Clyde River, Nunavut that Bob Goethe was wondering about is a case in point.

Attached below is a recent official "aerodrome" chart for the Clyde River airport, and you can see two relevant features. First, there is a diagram indicating the magnetic variation which was 46° west of true north way back in 2003 and its annual rate of change (about 0.8° annually, but note that linear adjustment for the 16 elapsed years would not be correct). Second, the runways are numbered 02T/20T. The runway heading when landing from the south is towards 020° True so that's 02T. The magnetic labeling would be roughly 07/25 (as of 2003) and would require re-labeling in about a dozen years.

So problem solved. They use true compass bearings up there for runways. 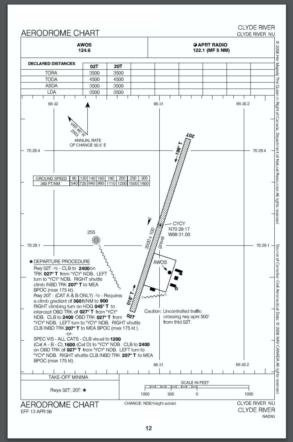