The more I look at different sources for information on the Coutinho sextant, the more confused I get. I’m coming to the conclusion that a lot of what you see on the www and in books is incorrect, either that or the design changed with time. One source of confusion is that some articles appear to show left handed Coutinhos (photo 1), which would have been a good idea. It’s only when you realise that some photos of left handed and right handed Coutinhos are the very self same sextant (photo 2) that you realise that someone probably inserted a negative the wrong way round at one stage.

The observer’s view of the T is shown inverted in Fig 22 and 23 of Precision Astrolabe (repeated at photo 3 for convenience) and in Fig 172 of ‘Taking the Stars’. However, the sea appears to be the correct way up. This would appear to indicate that the telescope is non-inverting, but the bubble collimating slice inverts the T to the observer. Can this be correct? Without a Coutinho to look through, I have no way of checking this. I look to Bill for the answer.

The final query is, in Bill’s photo, the sea is to the left of the horizon mirror, but in Fig 22 of ‘Precision Astrolabe’, the sea is to the right in the observer’s view. Is this lateral inversion a mistake or is it a function of the telescope system? DaveP 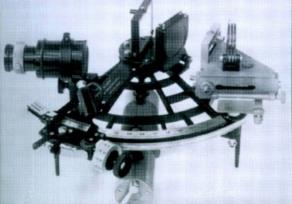 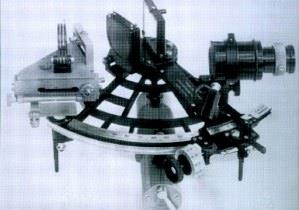 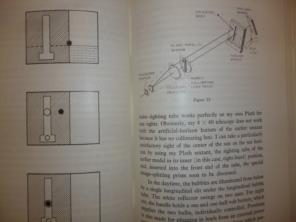