You wrote:
"Hence it looks that at some point in the Reverse-Engineering Process likely timplemented in the USNO Web Application clone Refraction and Parallax corrections might not be performed in the right sequencing order."

Sorry I didn't comment on this sooner. I remember you made a reference to using the altitude corrections from my "USNO web app clone" and I made a mental note to discuss the issue in a follow-up post, but that mental note was apparently written in invisible ink. :) Details follow, but I'll say here at the top that my "reverse-engineering" matches the original product. But the design choices in the original are certainly questionable. I agree.

Background and some details...

Just over two years ago, the folks managing the USNO celestial navigatiojn data web apps posted a notice informing the world that the website would be "undergoing modernization" and that it would be down for six months. Six months?! At that time some of us (and not just here in the NavList community) expressed our shock. But this is the cost of having a website, and indeed the entire USNO itself, under the security umbrella of the US Department of Defence when it is fundamentally a scientific organization with only a legacy connection to the Navy. So be it. I captured a bunch of output pages from the original USNO web app that week thinking at the time that I might want them for reference. I hereby award myself a cookie (a real cookie, not the internet kind) for having the foresight to save those output pages.

The US went into COVID lockdown around the middle of March 2020, and that, we all assumed, might add perhaps a month or two to the project. Upgrading a website does not require in-person meetings. This should have been an ideal case for a network-based project. But no. The delay continued...

In September of 2020, I wrote:
"And of course, pandemic or otherwise, that deadline came and went, and who knows when it will return. Time for some voodoo!
As I was working on the rebuild of my web apps for predicted lunar distances, clearing lunars, and nautical almanac data, I realized that I could also build a clone of the USNO web app in a relatively short time. So I did. It's done. I have tested it, and it works well. I've made no effort to improve on the USNO tool. That's a project for another day. "

The highlight on the last two sentences is my addition today. The web app clone was intended as a quick project (literally a one day project!), a direct clone of the original USNO web app. I made only a couple of small changes in cases where the choices in the original web app annoyed me (and one, the language in the phase of the moon, that was too much trouble to clone properly for a 24-hour project). I followed the somewhat odd choices for the altitude corrections in the original web app, which were always strange, but I dropped the SD correction for the planets since no one does that! And Gacrux is not highlighted in blue. :)

In the comparison image below, you'll note that my clone matches every number in the original to within a tenth of a minute of arc and 90% show no difference even at the tenth of a minute level (exception: the GHA of Polaris, but a difference there has very low significance since we're so close to the celestial pole). And you'll note that the altitude corrections in my clone match the original except for occasional tenth of a minute differences in refraction. So this tells us something interesting about the original web app. What are those altitude corrections?? What question do they answer?? Arguably, they are misleading, and I would not have made that choice. But as I noted over a year ago, I was not attempting to improve the original except in the very few cases that I alluded to above.

It is now two years since the USNO web apps went offline. The tech behind this specific tool was remarkably old-fashioned, and I suspect a project to upgrade the tool itself with modern technologies got rolled into the whole website upgrade process. Maybe it will be back tomorrow. I expected it to return soon a year ago. As I wrote then:
"Why build this? Strictly occult, infernal magic. We all know how this works: since I built this, the original USNO app is almost guaranteed to come back online within days, even hours! So think of it this way: I have jumped on the firecracker. I have taken the hit. And now the USNO web tools will come back online any day now... ;) "

The results so far appear to imply that magic isn't real. But have faith... 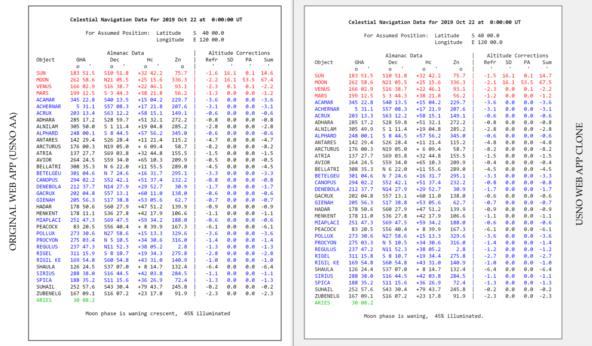