We've talked occasionally about using the Moon's horns for compass direction. You draw an imaginary line through the points or "horns" on a crescent moon or, if you can identify features on the Moon's face, you draw a line through the poles of the Moon, and the line extended (as a great circle arc) points north or south. That's the plan, but it's only an approximate direction, and under some circumstances it fails completely.

Yesterday evening while I was rounding up the chickens, I noticed that the Moon's horns were vertical. I've simulated this in Stellarium in the attached image. I had been paying attention to the phase for other reasons, and it was just about 48% full (both by visual appearance and by calculation). Just after 8:00 Eastern US time here on Narragansett Bay, the line through the horns was almost exactly vertical so I could easily trace it down. The line ended well into the southwest, and checking the Moon's azimuth it was just about 210° or 30° to the right of south. As it turned out, this was in fact an example very close to the extreme case. The Moon was near the celestial equator (in other words, declination near 0°), and that's when the azimuth results are worst. In fact, the line through the horns (or better, the poles) extended across the sky does not point to the celestial poles, which would be perfect for azimuth. Instead the line through the poles of the Moon points to the ecliptic poles. The ecliptic poles are located 23.45° away from the celestial poles along RA 18h (SHA 90°) in the north and RA 6h (SHA 270°) in the south. In the northern sky, the north ecliptic pole is roughly halfway between Polaris and Vega.

Sometimes the Moon will work perfectly for azimuth. If the Moon is near the same RA/SHA as either of the poles, then the ecliptic pole and the celestial pole are lined up in azimuth. On the other hand, if the Moon is 90° away that perfect alignment, as it was for my moon observation last night, then the difference in azimuth can be quite large. Near the equator, it's not too bad: the azimuth error maxes out equal to the tilt of the ecliptic, about 23°. At 40° latitude, the error is as much as 31°. At 50° latitude, the error is 38°. And, getting close to the arctic regions, at 64° latitude, the error is as much as 65°. There's a little spherical triangle problem you can work here: the maximum azimuth difference between the celestial pole and the ecliptic pole is given by:
sin(Azm) = 0.3979 / cos(Lat),
where the constant 0.3979 is just sin(23.45°). For this calculation, I'm assuming that we can ignore the Moon's orbital inclination relative to the ecliptic which is valid if the observer can see the Moon's surface features (binoculars help!) and define the pole-to-pole direction instead of the visible horns. 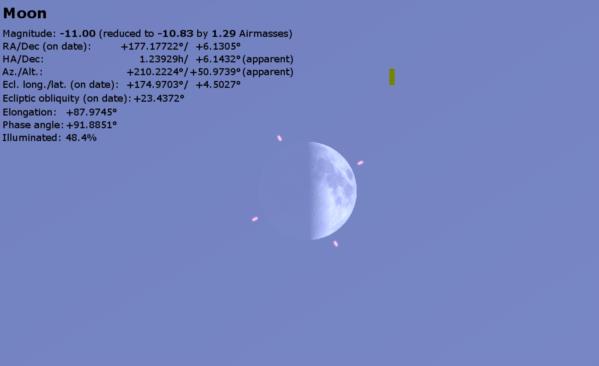