A little off-topic nostalgia, but with a nautical and celestial hook. During the Apollo missions to the Moon, Gulf Oil bought a lot of air-time on NBC television to run a rather long commercial featuring a happy, optimistic Irish sea chanty about a supertanker, the "Universe Kuwait", which was "bringin' home the oil" to Bantry Bay in the far southwest of Ireland. It was one of my earliest childhood memories of "great ships". Someone finally found a video of the commercial, with the song by the Clancy Brothers, and posted it to youtube. I watched it this evening and read more on the history. The commercial was an icon of the era. The enthusiasm and the naive confidence in the mega-tech of the supertankers nicely paralleled the over-confidence in the future of the manned space program. It could as easily have been a folk song about "bringin' home the soil" --the lunar soil returned by the Apollo missions. The oil terminal at Bantry Bay was eventually damaged so severely in a tanker explosion in 1979 that it was closed down. The tanker that exploded was named Betelgeuse.

I'm an able-bodied sailor and I've often crossed the line,
On whaling ships and sailing ships and ships of every kind.
But now I've got the very best job I've had for many a day,
I'm working on a tanker bringing oil to Bantry Bay...

She is the biggest ship, me lads, that ever sailed the sea.
As graceful as a swan she goes; we sail her at our ease.
From Arabie around Cape Hope we proudly make our way,
To keep all Europe movin' from our base in Bantry Bay!

They're building other tankers now to speed more oil to you,
The Universe Kuwait, me lads, Japan and Portugal, too.
Also the Universe Ireland, I'm very proud to say,
Is among the giant ships that's bringin' oil to Bantry Bay! 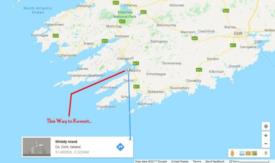 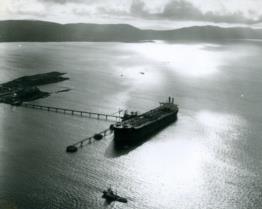 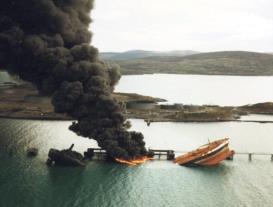