Robin, you wrote:
"I see Scorpius draped across the lighthouse in an orientation it can never assume from that latitude. Just by trial and error in Stellarium it looks like it's setting from a location much closer to the equator, say 10°N."

Yes, no further north that that. In fact, my best matches on a few trials were close to 20°S, but it's not guaranteed since there's a trade-off depending on the local sidereal time (that's LHA of Aries for the nav folks).

"From Scorpius you find the teapot of Sagittarius"

Yes, and it's standing on its spout! The "base" of the teapot is vertical, which just isn't right for New England.

"with an interloper, Saturn, in its lid which would put it sometime around May 2018. Careful measurements of the image could presumably pin things down a bit more precisely."

Yes, definitely late Spring of 2018. And ticking back and forth daily, I pinned it down to June 13, 2018 give or take no more than three days. I say "definitely" here under the assumption that this Milky Way background is no more than twenty years old. It was easy enough to focus on Kaus Borealis in Stellarium and then tick through all the months of the past two decades in about five minutes. Saturn was close three times in 2018 but on the other dates the Sun would have spoiled the photo.

"The sky image is actually not very good. Many of the stars appear as unequal doubles suggesting that the photographer bumped the camera during the exposure."

Aha, yes! I noticed that when I went looking for the moderately bright star near Saturn. Then I realized it was just an echo of Saturn, as you say probably caused by bumping the camera. 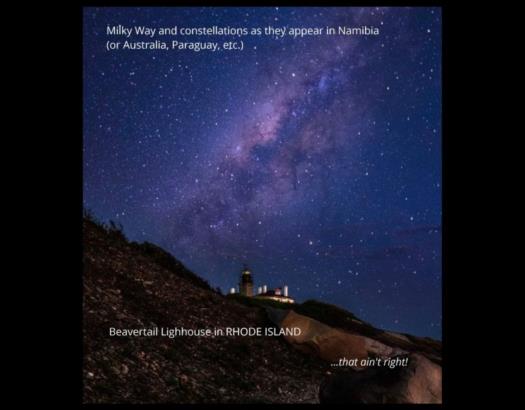