A comment on the photogrpaghy - as the navigation problem has been solved.  Night sky photography and Milky Way photography is a hobby of mine.

Some noted the double images in the photo Frank posted.  It may help to understand the techniques we use, though such obvious double images would cause me (if I were the photographer) to rework the image.

As most know, photos taken in the dark tend to be grainy.  In low light we set cameras to a high ISO setting (in the old days we used fast film).  This allows us to capture an image in low light for a given shutter speed, but introduces a lot of grain in the image.  In digitial photography we might think of this as "noise".  To combat this noise issue, we will take several images back to back and them map them onto each other in a digital stack.  As the noisy pixels appear in different places in each image they tend to cancel out.  Thus the stacked image appears less grainy than a single image.

If the sky is good and dark, my preference is 8 images of 15 seconds each at ISO 3200.  The wide angle lens I use for this is wide open at f2.8.  As you know, even without time between images while the camera saves the immediately prior image, that is 2 minutes of open shutter.  The sky moves a lot in 2 minutes (or rather we do on a spinning earth).

As we also know, the sky appears to move in a way similar to the hub and spoke of a wheel.  Imagine we have the camera lens aimed perfectly at Polaris.  In two minutes, the movement of Polaris would be so small as to be fine in a photo.  But towards the periphery of the lens field of view, the stars appear to describe a small arc.  That is not what we want in the photo unless that is our artistic objective.

Standard photo editing software, such as Adobe Lighroom and Photoshop, have functions which will stack images, but they do not do a good enough job for a Milky Way image.  Specialist software is available - at a price. As in other forms of astro photography, computer controlled motorised  devices are available so that the camera tracks the sky - at a price.  But most of us use Photoshop, or similar, and manually "stack" the images.  This is an art form but yields the best results once the skill is mastered.

Coming back to Polaris; because it appears relatively stationary over just 2 or 3 minutes, the objects around it appear to move in common with each other as we get further from the center of the image.  But when we photograph the Milky Way, our camera is not centered on a celestial pole.  So the celestial objects at the periphery of the image are not moving in concert.  A simple stack of images will work in one part of the photo, but not in another part.  So we have to stretch and compress along the horizontal and vertical axes to get the best result.

The double images are usually the result of a quick and dirty job - but still sufficient for most purposes.

If you see no double imaging, it usually means that the photo is a single exposure - look for the grain in the image to confirm that.  I say "double imaging" but this is often just celestial objects that are not perfectly matched - they may appear elongated or squashed.

Another trick:  we will sometimes take an exposure of the scene during twilight such that the foreground is visible.  Then we will edit that into the image and hand-stich the horizon.  Thus we can go to a dark sky location and get very good images of the sky, but appear that we have some light in the foreground.  When we do this it is obvious that nothing must move - so we guard the tripod jealously for several hours over food and beverages (and often lots of bug spray).  We will also use a flashlight in the foreground on occaisions.

We use a cable or wirelss control on the camera to avoid any movement.

In the attached image, the sky is 8x 15 seconds at ISO 3200 manually stacked in Photoshop.  The rest is a single image.  If viewed fullsized the digital image grain and the red/green/blue is obvious of the lake surface.  Viewed fullsized, in the sky some double imaging is apparent, but digital image grain is mostly absent - replaced with the infinite noise of the universe.

One of the unfortunate side-effects of stacking the images is that planets are often mistaken for "noise" because they are inconsistent with the stars in their movements.  So if that is important to us, extra effort is required to either edit down to a single image in the location of a planet, or make sure that we retain the short and contrary planetary track.

For the same reason, we will often miss a meteorite that appears in a single image, or the path of a satelite, or the flashing trail of an airplane.  So a careful eye is required when reviewing each image sepatrately before stacking if we want to keep those as part of the image. 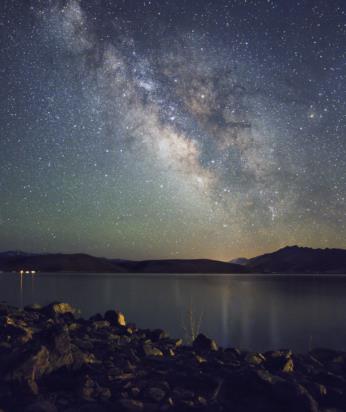