There are articles making the rounds about an analysis of some Ottoman Turkish archival documents from 1888 that seem to provide good evidence of someone having been killed by a meteorite. There are no other known cases of "death by meteorite". This is mostly because the Earth is a big place, and also because the atmosphere is such an excellent filter. Anything smaller than about 100 feet diameter, dumps all its energy high in the atmosphere, and any fragments fall at terminal velocity. By contrast, if we ever have suburbs on Mars, there will be occasional hypersonic strikes that will take out individual houses or whole "blocks" of houses.

The meteor in 1888 reportedly entered over eastern Iraq very close to the Iranian border (essentially the same border today). The article, perhaps strangely, does not mention that the initial entry and fireball was nearly over modern Halabja. While Halabja did not exist in 1888, avoiding mention of the city entirely strikes me as an intentional act today. One person may have been killed by meteorite in 1888. A century later in 1988 over 3000 people were killed by Saddam Hussein's forces in a nerve gas attack in Halabja during the Iran-Iraq war. Name your poison. 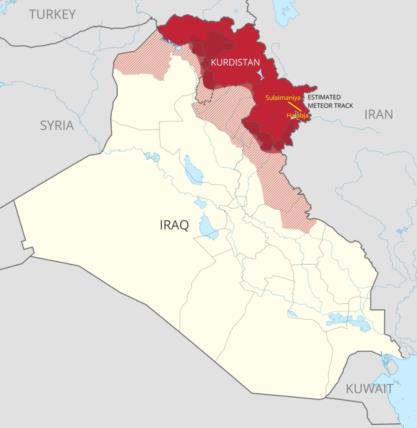