There seems to be a lot of confusion on the list about how Meridional Parts are calculated and what they mean.

Meridional parts were designed to correct for the distortions introduced in a Mercator projection, so that sailing a course

of constant directional bearing appears as a straight line on the chart.

The Mercator chart presents  any course of constant direction as a straight line  in (when in fact such courses trace spirals on the surface of the sphere, unless the course lies along a meridian or a parallel of latitude).

The change in latitude of such a course does correspond net "northing" of 60 nautical miles per degree of latitude change.  But the change in longitude does not correspond to a simple change in "easting" since the conversion factor

constantly alters with every change in latitude.  Converting a change in longitude to the number of nautical miles traveled in an eastward or westward direction requires correcting for the stretching of E/W distances by a factor which varies with the cosine or the secant of the latitude.

Mathematically this is done by integrating the secant of the latitude along the course.   The numbers in the table of Meridional Parts show the sum of the distortions starting from the equator and proceeding along the a Northward course until the final latitude is reached.

ending point.  Thus to find the correction needed to correct from a path that starts at one latitude and concludes at another, one need only look up the value in the table at the final latitude

and substract the value in the talbe at the initial latitude.

The earliest Meridional tables (Edward Wright, ca. 1600)  predate the invention of the calculus and integration and were generated by finding the distortion along each portion of the course resulting

in a one second of arc change in latitude and adding such changes together.   It was eventually discovered (Henry Bond, ca. 1640)   and then proved (James Gregory , Isaac Barrow, ca 1670)  that this value was equal to the natural logarithm of the tangent of the sum of

half the  final latitude and 45 degrees, adjusted for the appropriate angular units (degrees, rather than radians) and converted to nautical miles (i.e. seconds of arc).

This pdf file attached to this message will show the mathematical derivation more clearly than I can do in a text-based message.

An Application of Geography to Mathematics: History of the Integral of the Secant Author(s): V. Frederick Rickey and Philip M. Tuchinsky
Source: Mathematics Magazine, Vol. 53, No. 3 (May, 1980), pp. 162-166
Published by:

There is a downloadable paper on the use of meridional parts at the link above.

Proceedings of the Canadian Society for History and Philosophy of Mathematics, Volume 18, pp 173 - 199 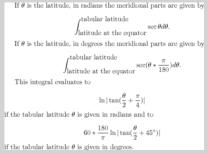