I found a scrap of paper of my fathers today from the 1950s containing a calculation for a course and distance for a sailing between Mukle Flugga and Troena Island (below).  Eventually I worked out it must be a Mercator Sailing, which I’d not heard of although I had heard of Plane Sailing.  I’d not seen the use of Tabular Logs before either as per NoriesTtables (9. instead of bar one), so that took a bit of getting used to.  Having now discovered Meridional Parts, I’m a bit flummoxed to understand why the ones in Nories Tables for the Terrestrial Spheroid  come to less than latitude x 60 from 0 degrees to 11.5 degrees before they start racing ahead.  Is this because of the compression of 1/293.465 whatever that means? 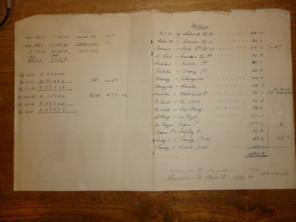