I have not yet read the numerous replies to this problem posted here.

So, here is my solution so far - and my reasoning for it (reference the attached diagram):

Then it occurred to me that it might be more efficient to travel directly to the mid-point on the river between the house and the barn (400 yards north of the house) and then straight to the barn. Or ... maybe there was some other point along the river which would result in a shorter trip. I could try some trial and error calculations which would lead me to the answer. Or, I could make a spreadsheet with a slider for the point on the river which would instantly allow me to see the varying distance. I chose the latter.

After a few seconds moving the slider back and forth, I discovered that a point on the river 534 yards north of the house (and 266 yards south of the barn) would result in a trip distance of 1,000 yards [the green diagonals]. This, of course, is less than either of the two methods I had tried before. And - as of right now - I can think of no other shorter route. For a moment, I entertained the idea of a circular route - but then I thought "No. That would be nonsense."

As for how a medieval farmer would arrive at this solution (without, of course, access to a computerized spreadsheet) - I have a vague idea involving a bit of string and a nail.

Now ... I will read the rest of the responses by much more learned men than myself, and I am sure I will be humbled (and probably a bit embarrassed). 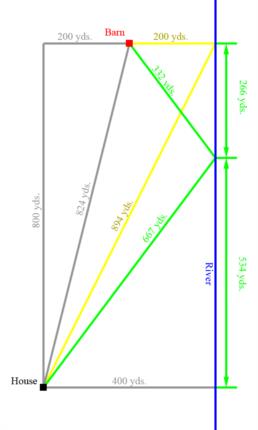