In reducing our observations, we account for the dip of the horizon. This is never measured, rather it is calculated. Paul Hirose has given us the perfectly acceptable
dip = 0.02977*sqrt(height of eye)
height of eye in meters
dip in degrees

Perhaps I can measure the dip. Please see the linked diagram. We want to measure Dip A + Dip B + 180 degrees. While this is outside the range of nearly most sextants, it is within the capabilities of a Reflecting Circle. In order for the Reflecting Circle to see this, a 90 degree fold prism is added to the near end of the telescope, so rather than looking down the barrel of the telescope, you look 90 degrees to the barrel, thru the fold prism.

So today, I ventured off to Orient Point (N41d 9.599m W72d 14.062m). Why Orient Point? Because it is a long narrow peninsula, with water all around it. There are several orientations which are not dip short, so I should be able to measure as the diagram shows.

I set up my reflecting cirlce and fiddled around with the 90 degree fold prism. Just as I got both horizons in view, I found myself talking to two very nicely dressed folks. They told me I was being watched by camera. They identified themselves as federal employees and asked what the heck I was doing. Orient Point is very near to Plum Island, the very direction I was facing, but not the direction I was measuring. There is a Animal Disease Center on the island, and access to the island is controlled by the Dept of Homeland Security. OFF LIMITS! I explained that I was holding a Reflectiong Circle (similar to a sextant, I told them) and measuring the dip of the horizon. I pointed out that Orient Point is a public park and that I wasn't a terrorist, really! They found my explanations reasonable and told me to have fun. Back to navigation.

At first there was an angle between the horizons. That is, horizon A was about at a 30 degree angle to horizon B. I found that his related to the verticality of the plane of the Reflecting Circle and the orientation of the 90 degree fold prism. Once resolved, I brought the horizons into alignment and read the vernier.

I attribute this entirely to operator error (me). Its possible I was measuring dip short to Block Island or to Montauk Point (see map). My hands were cold. It was getting dark. I don't have practice around this magnitude of angle. I was tired of holding up the circle.

I had to begin somewhere! I will try again soon. 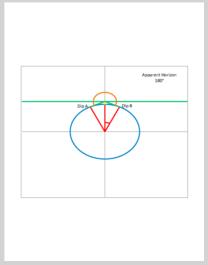