Reply
Re: Mear's slide
From: Gary LaPook
Date: 2014 Nov 22, 15:28 -0800
I just printed out the one you posted, cut it out and taped it on the slide of my MB-4A, almost a perfect fit. The only critical point is having the center line lined up with the center of the existing slide. I see you explanation of Mears developing it, pretty simple after HE got the inspiration since it was straight line variations.
gl
From: David Pike <NoReply_DavidPike@fer3.com>
To: garylapook@pacbell.net
Sent: Saturday, November 22, 2014 1:06 PM
Subject: [NavList] Re: Mear's slide

Gary.  I had to think back 50 years, but attached is my formula for acceleration error due to heading change.  It came out as minutes of arc correction = G/S in kts x heading change in degrees in one minute x 0.05278 .   It agrees to within one minute of the values in the Vulcan notes.  I was interested in your Mear’s slide.  Did you have one already, did you enlarge the photo on the web, or did you construct one?  At the time, I thought they were magic, but I realise now it wasn’t all that hard to construct, once Wally Mears had the brainwave of using it in the form of a slide for the nav computer.  Draw and number the GS scale using 1 kt = 1/20 inch. That is 1/10 inch per 2 kts.  A 1/10 inch division also corresponds to 2nm acceleration error due to IAS change x6.  At 360 kts on the GS scale mark the ‘Wander’ lines out either side of the centre line using the same scale, so one degree heading change gives 19nm error, which corresponds to 0.95 inches on the slide.  At 520 kts one degree of heading change gives 28nm error, which corresponds to 1.4 inches on the slide.  Then just join the wander lines up.  If I can get some 1/10 inch graph paper of the Internet, I’ll try constructing one. Dave
Attached File: 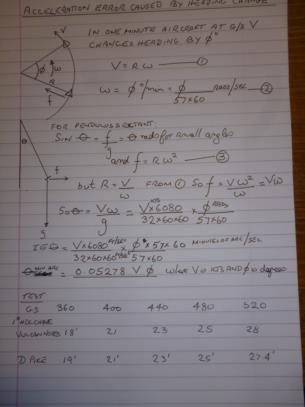