Not heard of this 'game', but it's fun.  Intereresting facts below, and a link to an ephemeris I'd not heard of but looks like fun, too.

Manhattanhenge — sometimes referred to as the Manhattan Solstice — is an event during which the setting sun is aligned with the east–west streets of the main street grid of Manhattan, New York City. This occurs twice a year, on dates evenly spaced around the summer solstice. The first Manhattanhenge occurs around May 28, while the second occurs around July 12.

The term "Manhattanhenge" was coined by Neil deGrasse Tyson, an astrophysicist at the American Museum of Natural History and a native New Yorker. It is a reference to the ancient monument of Stonehenge, in Wiltshire, England, which was built so that the rising or setting sun aligns with the outer "Heel Stone" when observed from the center of the monument at the time of the solstices.[1]

In accordance with the Commissioners' Plan of 1811, the street grid for most of Manhattan is rotated 29° away from true east-west. Thus, when the azimuth for sunset is 299° (i.e., 29° North of West), the sunset aligns with the streets on that grid. A more impressive visual spectacle, and the one commonly referred to as Manhattanhenge, occurs a couple of days after the first such date of the year, and a couple of days before the second date, when a pedestrian looking down the centerline of the street towardsNew Jersey can see the full solar disk slightly above the horizon and in between the profiles of the buildings.[2]

The precise dates of Manhattanhenge depend on the date of the summer solstice, which varies from year to year but remains close to June 21. In 2014, the "full sun" Manhattanhenge occurred on May 30 at 8:18 p.m., and on July 11 at 8:24 p.m.[1] The event has attracted increasing attention in recent years.[3] The dates in which sunrise aligns with the streets on the Manhattan grid are evenly spaced around the winter solstice, and correspond approximately to December 5 and January 8. 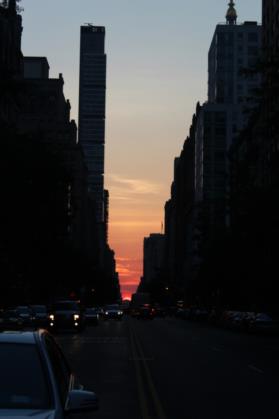