Norm Goldblatt, you wrote:
"For some reason, I thought Lunars were a measure of distances from the Moon to a star or planet. Is this distance useful, as well as distance from Moon to Sun?"

The tables below may remind you of the sorts of objects that we can use for lunars: these are pages of lunar distance tables from the Nautical Almanac for 1787 and also for 1843.

These tables of distances of the Moon from the Sun and from nine (briefly ten) bright stars near the ecliptic were the primary motivation for creating the Nautical Almanac & Astronomical Ephemeris starting in 1767. It was all about lunars. By the early 19th century, the tables began to seem a little out-of-date and some changes were initiated. In particular distances for the bright planets were added and the time parameter was changed from GAT (A for Apparent) to GMT. These changes began in 1834. Also logarithms for proportioning the time between the three-hourly tabulated values were included for convenience (they're so-called "proportional logarithms" or PLog where PLog(t) = log(10800/t); 10800 being the number of seconds in three hours). Tables of lunar distances in the almanacs of other navigation cultures (France, Spain, Germany, at least) were generally constructed in the same way using the same list of Sun, 9 lunar stars, and bright planets during the heyday of lunars (ending about 1850).

Primary source evidence that I have seen suggests that, at least at sea, lunars using the Sun as the other body amounted to something like 85% of all lunar sights taken. This reflects the general rule that celestial navigation (known as nautical astronomy back then) was primarily a daytime activity in the 18th and 19th centuries). 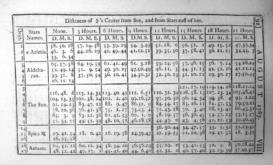