I previously posted the lunar distance tables for the month of Brumaire in the year 9 of the "French Era" calendar, corresponding to the last week of October and the first three weeks of November in the year 1800: 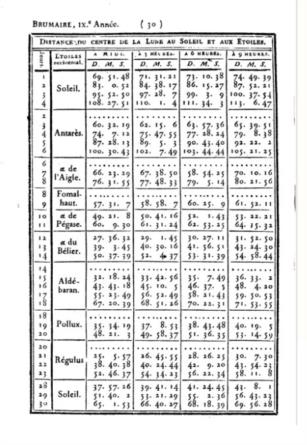 Yesterday, I keyboarded all the values and then compared them against the data from the British Nautical Almanac and also accurate modern lunar distance tables (from my web site here). The results are interesting. The French tables are identical to the British tables adjusted to the Paris meridian but with significant blunders in the adjustment process.

In the attached graph, I've plotted the error in seconds of arc compared to modern data against the day of the month of Brumaire (not all 30 days of the month since they skip a few days around New Moon which occurred on November 16, 1800 or 25 Brumaire IX). For the Nautical Almanac, the comparison is direct. For the French tables, I calculated the rate of change at noon by comparing the lunar distance at noon and the lunar distance three hours later in the modern data, and I multiplied that rate by 560 seconds which is, nearly enough, the longitude difference in time between the old Paris meridian and the Greenwich meridian. While the error floats about in a range from 0 to 60 seconds of arc in both almanacs, you can see that they track very closely with mean differences of about one second of arc, except in two cases. This presumably implies that the French in 1800 were still directly copying the Nautical Almanac values and then adjusting them using the same procedure that I used (rate·560s). But they made errors. There's a big one on 5 Brumaire where the LD for Antares is wrong by 120" (see PS) and a less significant error on 17 Brumaire where the LD for Aldebaran is wrong by 18". Assuming the errors aren't my own blunders, that's two tabulation errors out of 28 cases. The real error rate was probably lower, but I wouldn't be surprised if it was as high as five percent. Did this high error rate in the French tables contribute to the apparent indifference towards lunars among French navigators which the Baron de Zach complains about (he could be wrong, by the way)? Did this low quality help to motivate the rewards for new calculation algorithms which were offered by the French and the rapid improvement in the tables in the following decade? And did the failure to provide accurate navigational data for the Paris meridian contribute to the decline of that meridian among practical navigators?

-FER
PS: An error of 120" in the tabulated lunar distance implies an error of 240 seconds in the resulting Paris Time or an error of one full degree in longitude. That's a serious error. This would be an insurmountable error added on to any normal errors in observation and adjustment of the sextant.