Jackson, this was has turned up before in NavList messages. It's also fake. The Moon is computer-generated. The ship is computer-generated, too. It's a virtual model. The entire image is computer-generated artwork. The problems with the Moon arise primarily from its low altitude. When the Moon is this low, it is considerably flattened and reduced in brightness to a level where the conditions in this photo would be nearly impossible. It should also appear deep red in color. Also notice that the Moon has too much "limb darkening" --a common visualization error in planetarium software. As for the vessel, you'll notice that the furled sails are digital copies of one or two individual models. Counng down from the top, look at the second, third and fourth sails. It's the same shape, scaled for different yard lengths, and the fourth one is flipped left to right. I can just imagine the digital artist sitting there cutting and pasting features in some 3d modelling software. 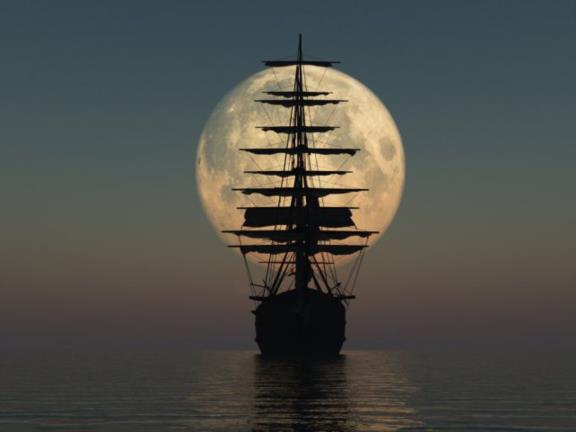 Finally, even if this were a real ship and a real moon, Don Seltzer has pointed out that the odds of getting this photo are remote. The ship is almost perfectly aligned with the line of sight to the Moon. Given that the observer would have to be miles away (to see the ship so small relative to the half degree wide Moon), this would be an amazing stroke of luck.

The Internet is filled with fake imagery, tall tales, hoaxes, imaginary demons, and imaginary heroes. That's the art of the 21st century: distinguishing reality from fiction. In fact, by having so many fakes thrown in our faces, maybe the Internet-savvy 21st century is more wise on this issue than any previous century's population... Maybe.