Tony, you wrote:
"I found this video of Moon-Saturn occultation. I wonder if it is possible to do forensics of this sight? All we (me, actually) know it was observed from Perth, Australia."

Well, we also know it happened on about 22 February 2014 and that the local time was near dawn. That's enough to simulate this in Stellarium, within limits. The view is consistent with Perth +/- half a degree of latitude, and it's also consistent with the longitude of Perth a few before 21:58 UT which happens to be just before dawn. Note that we can trade longitude for time, as expected, so we can only say it's "consistent" with the longitude of Perth. A few seconds before 21:59 UT, we could see the same mid-occultation moment from a longitude about 30' east of the selected spot in Perth. Of course from that location, the Sun would be a bit higher in the sky, just after dawn. If we had specific details on the altitude of the Sun or some other well-placed object for local time, then we could nail down the longitude.

In the attached images, you can directly compare the Stellarium simulation with a moment in the video near the middle when the disk of Saturn is half occulted by the Moon. Note that Stellarium insists on displaying some of Saturn's moons here, which I would say should be counted as a "bug" in the simulation since they are all fainter than magnitude 10 at this time. These moons would not be visible even in nautical twilight, let alone right at dawn. In addition, even in darker skies, they would be lost in the glare of the Moon when so close to it.

By the way, it's somewhat misleading to refer to this as a lunar. This has become a bad habit in NavList messages, so you're not alone. Lunars and occultations were always treated differently in traditional navigation and historical astronomy both in the steps of the observation and also in the mathematical analysis. We can see today that an occultation might be counted as a "lunar distance" where the distance just happens to be zero, but this technical identity doesn't get you very far. This video displays an occultation of Saturn. 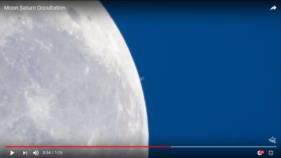 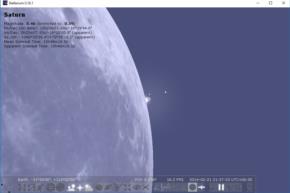