I wrote this up for casual observers in southern New England. The events occur at the same absolute time (UT) everywhere so you can adjust the times below, which are US Eastern, using the usual offset.

It appears that the clouds will break as temperatures plummet. The forecast now calls for clear skies over southern New England by midnight and possibly even by the beginning of the eclipse an hour and a half earlier.

It's going to be very cold and windy. Windchills will be at zero or below, so be careful. Don't just dress warmly -- bundle up like a polar explorer! You don't have to stay out long. Lunar eclipses are slow-moving events that do not demand much of you attention. Pop out for a peek, and then get back in.

The eclipse runs from about 10:25pm to about 2:00am. SET SOME ALARMS ON YOUR PHONE and see just the highlights. Run outside for a minute or two at each event. Use these times:

MORE DETAILS
Doesn't it start at 9:35? Only in a narrow technical sense. That time is when the Moon begins to move into the Earth's penumbra, and it's completely unobservable. When the Moon is deep in the penumbra, about 15-20 minutes before the main events, then you'll notice some moderate shading on the left side.

Partial eclipse begins at 10:34. This is the beginning of the "main event". This is when you'll see the first "bite" taken out of the Moon. The left edge of the Moon enters the Earth's umbra where it is completely in shadow. An observer standing on the Moon in that area that has been bitten out by the umbra would no longer be able to see the Sun at all. Instead an observer there would see a bright red ribbon along the edge of the Earth in the sky. That red ribbon is the light of a string of a thousand sunsets on the Earth casting their light onto the Moon. That's what makes the Moon appear somewhat red or orange during a lunar eclipse. It's the light refracted and redddened through the Earth's atmosphere.

Total eclipse begins at 11:41. Totality lasts just over an hour. During total eclipse the Moon is quite dark. It looks "spooky" during total eclipse. Try to get out for a few minutes to see totality. Deepest eclipse, when the Moon is darkest occurs at 12 minutes past midnight. If at all possible, get somewhere dark, away from streetlights. The stars will be as bright and clear as on any moonless night and that spooky dark disk, slightly red in color, is all that's left of the Moon.

Total eclipse ends at 12:44. From here the phases simply reverse the earlier show. Unless you're an avid eclipse fan, there's really nothing to see from now forward unless you were clouded out earlier.

Partial eclipse ends at 1:51. The last "bite" disappears from the Moon's disk, but there will be some light penumbral shading on the the Moon's right side for another 15-20 minutes.

Should you watch it online? No. That's like watching a sunset or looking at a rainbow online. It can be done, but you can look at any video of any old lunar eclipse online. There's no point. Also, there are no surprises in a lunar eclipse, no amazing events that you will want to catch 'as they happen' by viewing online. This is a visual phenomenon... a pretty bit of astronomy... something worth seeing with your own eyes.

Wait, isn't this a "Super Blood Wolf" Moon? Should we look for that?? Nah. That's all social media blather. The "super-ness" of the so-called "super moon" is invisible to normal observers. The expression supermoon has only been in the popular consciousness since 2011 (thanks to a chance coincidence between an online article and a tragic earthquake). As for "blood", yes, the Moon often has a red or orange tint to it during a lunar eclipse. This is normal in every lunar eclipse. No blood about it! The January Full Moon is sometimes known as the "Wolf Moon" thanks to publications like The Farmer's Almanac. It's not "ancient native knowledge" or anything like that. Again, it's social media stuff. Enjoy the view! Ignore the hype! 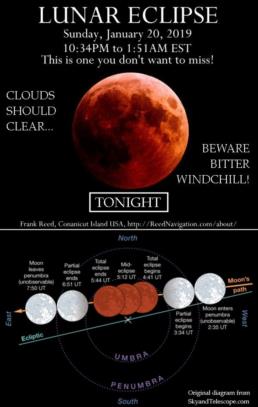