Yes, that looks good, except for a little arithmetic error, or more probably just a typo: that's a change of slightly more than 17' in 24 hours, right? Not 19'. And then our navigator interpolates. He does it the traditional way, first adding 6' for longitude (because 125°/360° multiplied by 17.15' yields 5.95') and then by adding 4' for local time (because 5h/24h multiplied by 17.15' yields 3.57'). The 20th century interpolation would use the Greenwich Time in one step instead of the longitude and local time separately (and 13.25/24·17.15' yields 9.5' so the same result, of course, within rounding error). The interpolation makes sense, as you can see.

You've quoted the declination as "16-44-44". That matches what I would give for the best modern value. My online Nautical Almanac for this date (here) gives 16° 44' 44". But the real US Nautical Almanac that I'm looking at (here) shows two values: both 16° 44' 44" and also 16° 44' 32". This is a completely insignificant difference, however the second value matches what the navigator has written down, so that tells us a little something about this navigator's practice. This tiny difference arises because the almanac provides the Sun's declination both at Greenwich Apparent Noon and also in a separate table at Greenwich Mean Noon (my online Nautical Almanac can also generate the data for GAT and it's a match: here). This difference is inconsequential for navigation even by relatively exacting modern standards (no more than a quarter of a minute of arc difference in dec).

There's something else to notice here. The navigator has carefully interpolated the declination for elapsed time (parcelled out between longitude and local time), but he does not interpolate the equation of time, instead using the value at the beginning of that Greenwich date. This is no serious issue, amounting to perhaps three seconds of time or about a minute of longitude, yet it's certainly an inconsistency in practice, and it also seems to have been the custom, at least among American navigators. I have seen this custom before.

I know you know this, Henry, and you yourself were clearly an exception to the historical rule with genuine expertise in the math. But speaking generally, these historical navigators were craftsmen, practitioners, human spreadsheets. They did their work as they learned it, according to customary practice and their "local culture" of navigation. Terminology like "log secant" and "log sine" can seduce us and lead modern observers with backgrounds in engineering or physics or mathematics into believing that we're seeing people "doing math", navigators understanding the underlying principles and applying the science of spherical trigonometry. This is a mistake for nearly all of the tens of thousands of navigators who used these methods. They weren't "doing math" --they were working recipes, applying rote rules, and we can see that in their work. A column in a table labeled "log secant" might just as well have been called column "A" as far as these practitioners were concerned. For nearly all of these navigators, the names were mere jargon. And in fact, that's one shortcut I take in my classes and workshops on historical time sights. I label the columns with their arguments, just to save a little time. 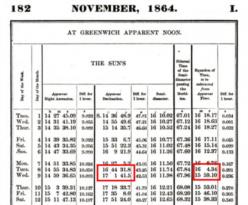 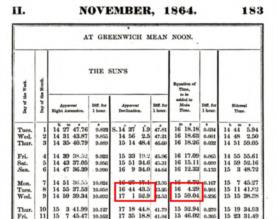 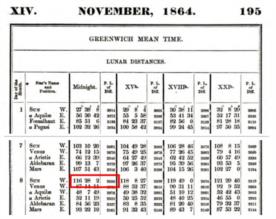