This is still difficult to read but getting there... This was written in faint pencil in a miniscule script in a space no bigger than a postcard. Many of you have seen some version of this "tiny lunar" before. I posted the sight for local time two days ago. The rest is the work on the lunar observation itself. It's interesting that this was done in 1864. This is the latest lunar observation I have ever seen, fifteen years later than the last before it. Lunars were gone by 1850 except in rare cases, like this one. Why this navigator, Charles H. Townsend, was a fan of lunars at such a late date, I do not know. Every tool in navigation has its diehard fans!

For those of you familiar with my "Easy Lunars" essay, see if you can spot the calculation of the "corner cosine" (or the angle that corresponds to it) for the Moon corner of the triangle. It was the faintest part of the work in the original, visible only in light at a shallow angle. Much of the rest of the work is quite familiar. Notice the antiquated approach in the upper left where the navigator estimates the Greenwich Time from the longitude and the local time. This was a necessary step in the pre-chronometer era. But in 1864?? He has a chronometer. In fact, he compares his lunar longitude to the chronometer longitude. He should have taken GMT from the chronometer rather than estimating it. 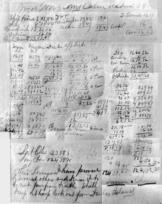