Last night (early hours of August 24 by Greenwich Time) I took this photo looking northeast towards Newport, Rhode Island. That's the Pell-Newport Bridge. You can make out the "pentagon" of bright stars in Auriga with Capella high above the center of the bridge. The Moon is over-exposed. Aldebaran is just below it. At the time of the photo, the azimuth of Aldebaran was about 5-7 minutes of arc to the left of the Moon's center. Can you determine UT? How about latitude? Local time?

Which of these determinations is accurate? Which are not? If you had to put error boxes around your latitude and longitude, would they at least contain the observer's location?

You might think that this is all just a pointless game, but this sort of technique for testing astronomical details in photographs is essential for fact-checking photos of real-world events. Many photos are spoofed, but few digital artists bother to get the astronomical details right. And of course, it's a good test of our understanding of underlying navigation concepts. 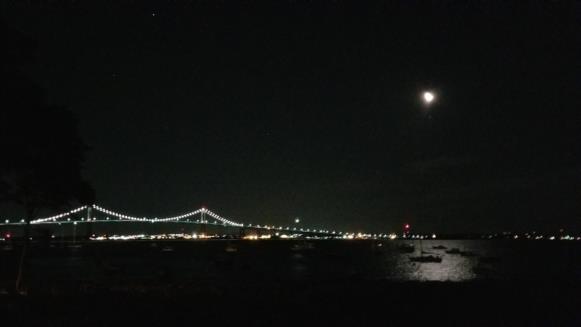