As I indicated in an earlier post I have added an option to include quadratic Besselian Elements in the spreadsheet I wrote to compute local circumstances of lunar occultations and longitude from occultation timings.

For 2020 the spreadsheet can generate a list of occultations of all stars down to 7th magnitude visible from any specified location. The inclusion of quadratic terms makes the results agree with “exact” calculations to within a second of time.
Although I am fairly confident that the spreadsheet will generate the same level of interest in finding longitude by lunar occultation timings as the previous version did (i.e. none at all) I am placing it here in the off chance that someone might want to give it a go. This particular version has been set up with Mystic Seaport as the observing site but it is just a matter of changing that on the “Control” Tab.

In the course of testing I did encounter some situations that required investigation. Finding longitude and GMT from an occultation requires the observer’s latitude and the local mean time (LMT) of the event as input. Nowadays someone who wants to try their hand at finding longitude this way is probably just going to want record the time of stars disappearance (immersion), plug it into the spreadsheet and have their longitude pop out. It turns out however that there is an ambiguity here in that in general there are 2 points on the Earth’s with the same latitude where the star disappears at the same instant. These 2 distinct positions can be arbitrarily close and possibly be indistinguishable by dead reckoning. Such a case is shown in the attached figure. It shows the orthographic projection of an occultation as seen by an observer in the direction of the star. The navigator, who is timing the occultation, is located at the red dot and his parallel of latitude is indicated by the black line. If you were to zoom in far enough you would see that the grey disc of the Moon extends just north of the parallel of latitude. There are therefore 2 locations with the same latitude where the occultation is observed at the same instant of time. Those positions are also very close in longitude to the extent that either result is plausible and the observation cannot be used to decide between them. As time progresses the 2 locations of given latitude where the occultation occurs at the same instant separate and can be distinguished by comparing to the DR estimate of longitude. There is no such ambiguity when LMT is used. 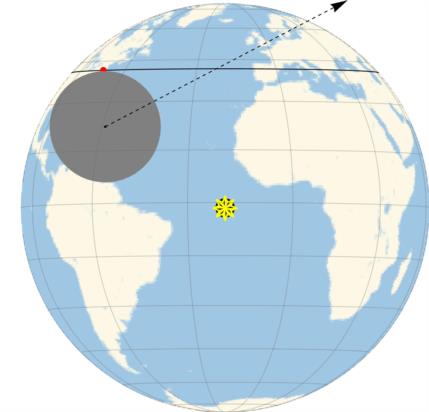