At this time 151 years ago Major John Wesley Powell was undertaking the first expedition through the Grand Canyon. He had planned to make astronomical observations to chart the course of the Green and Grand (Colorado) Rivers along the way. His ability to fulfill this aim was significantly limited early on when one of their small boats was swamped rendering the full complement of 3 chronometers, being carried on board, inoperable. Nevertheless Powell soldiered on pressing an Elgin watch that he also carried into service as a chronometer. The full story of the expedition can be found Michael Ghiglieri's book "First through Grand Canyon" and conference proceedings by Richard Quartaroli http://www.riverguides.org/History/GrandCanyonHistoriansSymposium2005.pdf . The lunars that were performed on the expedition were the topic of a workshop Frank Reed hosted at Mystic Seaport in August 2019.

Powell apparently planned to take Equal Altitude (EA) sights of the Sun using an artificial horizon (AH) in the morning and afternoon to find local mean noon (LMN). If the chronometer is set to GMT then longitude can be quickly found. Sets of sights taken from the same location on successive days can be used to determine the chronometer rate since the interval from LMN to LMN is 24 hours.

Over the past several days I have been carrying out rounds of EA sights in the way that Powell did and using them to extract my longitude. I initially found it fairly challenging. Powell, who only had one arm, managed to knock out around 20 sights in 10 minutes. I've been doing a much more modest 12 sights in around 15 minutes but with practice could probably double that number. Things would be much easier with the aid of an assistant to note the time when "mark" is called. Following a suggestion from Lars Bergman I have jerry-rigged a mount for my sextant to a camera tripod which makes things considerably easier. Whether hand held or on a stand it's important to diligently keep swinging the arc to judge the exact moment of contact of the limbs. On the stand this can be done by just applying pressure to flex the mount slightly.
I record the times when the limbs meet in 30' steps at AH altitudes betwen 90° and 95°30'. There is no need to apply corrections for semi-diameter, refraction, or I.E. All that is required is that the morning and afternoon sights are recorded at the same measured altitudes.
In my first 3 attempts I could see from the variation in the recorded time intervals between sights that I was not doing very well. Nevertheless the final longitudes all came in to around 1NM of my location. In my 4th attempt on 26 July the time intervals were much more uniform and gave a longitude about 0.1NM from my location. Afternoon observations of 27 July had to content with wind. I am using the poorly designed Davis AH which is highly susceptible to breezes. Unlike most AH sights you can't just wait for the breeze and ripples to die down. The observation has to be taken at a precise moment in time. Despite this the longitude obtained came in at 0.2NM from my location. These observations and their reduction are attached below along with an explanation of the background behind the reduction method that Powell used.

I also attach an image of Powell's logbook from 18 July, 1869 showing the EA sights he recorded on that day and a second page showing his reduction. The full log is in the Smithsonian Institute https://sova.si.edu/record/NAA.MS1795AB
With afternoon temperatures in the northeast US close to 100°F, I think I got some idea of the conditions Powell faced. The reduction is also available in a spreadsheet that automatically calculates the Equation of Time, Sun's declination and rate, which I can make available if anyone is interested in giving EA sights a try. 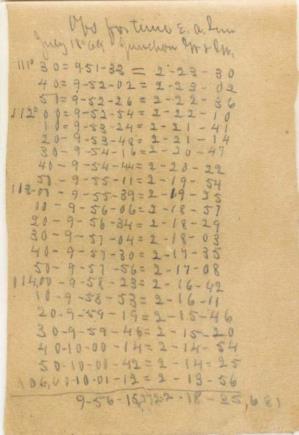 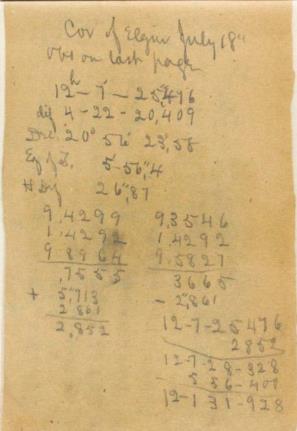