these are exquisite scales.
I can see the log() scale being used in the Fuller version we discussed.

The line-up problem, however, is a total different animal.

First, both scales have to close exactly at their edges when wrapped around.
For the inner drum that may be be possible for the CelNav hobby engineer to do.
Secondly, the scales have to be made for different drum diameters and therefore for scales of slightly different physical lengths. Further, a small gap between the drums is necessary so they slide over each other without sticking. However, we need a rather narrow gap since any radial shift perpendicularly to your line of sight while reading will deteriorate accuracy. Also, the outside drum should be sturdy. A soft one, like a foil, will change its shape and cause local misplacement of the scale in unpredictable ways I suspect. I am thinking of bubbles.

There are pictures of  a German Bygraves ( one attached ) on this list. On one, the outside drum has split, and you can see inside the mantle material. To me, it looks as if this drum was made in layers from the inside out. Maybe it was constructed by rolling paper sheets tightly one over the other with a thin layer of glue in between until a thickness of  5mm or so was reached. In my eyes, there are three significant advantages to this technique:  (i) starting out with the correct inner diameter,  (ii) an exact cylindrical shape of the interior.  (iii) our friends can most likely do that. As a refinement: when all these sheets have the scale - a little bit too large -  printed on it you just keep wrapping until the drum has increased in diameter such that the last sheet's scale closes exactly.

That may work - may!  I've never done it. My preference would actually be a 1 - drum Fuller because of its simplicity. It is much easier to build and easier to explain. The CelNav friends of ours who will have come to like its construction and use may still advance to the Fuller 2 for another fun project.

your language is perfectly clear! Just my maths are not, likewise my technical drawing with design details. (see attached).

I have attached 2 PDFs of the original Fuller scales done by Wayne Harrison some years ago. I'm sure he wont mind you using them.They will need to re-sized for whatever size tubes you use. I tried to send the miniFuller condensed scales, but these were huge 60mb files, having been heavily edited in Photoshop 7. If you want those, may have to send on disk when I get out of hopsital. (few weeks)

I've never measured the length if the scales, but I think the original fuller scale is 41feet long.

I have found the main accuracy issue is to get the height of the scales exactly the same otherwise you get mis-alignement.

Hopefully, I'll be back in action soon and be able to help more.

Best wishes to All 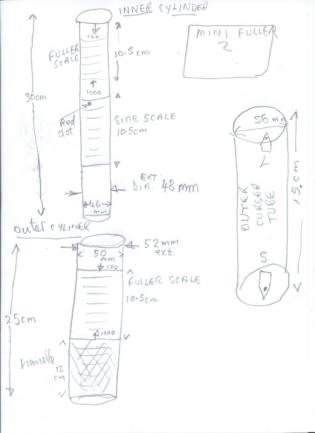 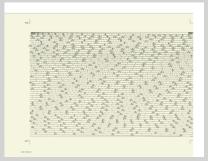 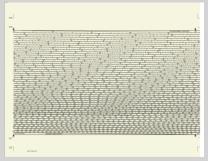 (Fuller-T2.pdf: Open and save or View online)