I think you are onto it. Putting your earlier question about a 24hour dial face aside, let look at how the standard 12 hour Lindbergh-Weems Second-Setting Watch works.

I view the watch as a circular slide-rule that converts time-to-angle or angle-to-time. It can be used either way. BTW, the watch arc angles are degree-minute-seconds, not degree-minutes and tenths.

Restating the obvious about this watch, it is set to Greenwich Mean Time. Its clever design allows the second hand to be syncronized perfectly GMT seconds because the inner-most second face can be rotated to match the second hand's sweep, thus the watch's name Second-Setting. Despite what many watch blogs, sales outlet blurbs and even Longines' own watch manual says, it does NOT, in and of itself, directly indicate your longitude! To find your longitude, you still need to finding/estimate your Local Hour Angle. The difference between GHA (derived from the watch) and LHA (derived some other way) is your longitude.

Here are two examples of finding the sun's GHA. There are other methods with bezzle rotation but what follows I think is the simplest way to start fiddling with this watch. You can print the attached image and pencil in the GMT for each example to help visualize what's happening.

Example 1
Assuming our watch is the 12hr face design. GMT is 03:23:07 and we know that it is AM. We know from the Nautical Almanac that the Equation of Time is 13:04 fast. As we convert GMT hours, minutes and seconds as well as compensate for AM and EoT, to their GHA angular equivalents, we list the GHA partial angles one-by-one and then sum them up to get the sun's total GHA.

- Start by aligning 12 o'clock with 15 degrees on the bezzle
- we know it's AM, so GHA list starts with 180 degrees arc.
- for EoT correction (GMT to GAT), look at 13 min time and read 3d15' arc from outer bezzle. Use second-setting dial, convert 04 seconds time to 1'arc. Add these two arcs. EoT is fast, thus it's sign is positive. Add 3d16' to list.
- at 3 o'clock, we add 3*15 or 45 degrees arc to the list. There are tricks with the bezzle but that's for later.
- at 23 minutes past the hour, we see the minute hand is aligned with 5d45' arc on the bezzle. Add to list. For minutes time, we always use the whole time minutes because the extra time seconds will be converted to arc via the second-setting dial.
- at 07 seconds past the hour, we see that the second hand is a little past the 1' arc mark. We visually interpolate and say it is 1'45" arc.  Add that to the list.
- sum the partial angles to find the sun's hour angle:

Tony, there are other ways to use the time-angle scales but the above examples will give you an introduction. Hope the examples are clear enough. Its takes far more time to explain how to do it than to do it. 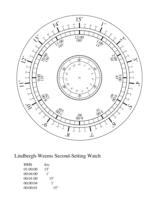