HMS Terrible , an aircraft carrier, was launched 30 Sep 44. My grandfather took me to watch, travelling using the steam ferry from Oreston to Devonport, giving way to the Sunderlands and Catalinas (PBYs.). No, we weren’t in the box swinging the champagne, but on the slipway, under the starboard bow. Grandfather was one of those knocking out the wedges.  I recall the huge pressure and friction forcing steam from the timber baulks, and the rattling of the chains used to slow her launch down.

Some might question the wisdom of putting a child in such as position.  But the hole in the roof caused by the incendiary bomb which didn’t explode had been fixed, and there hadn’t been a serious air raid for a few months.  Other things were happening in the English Channel.  A different era.

The boy went on to skipper a boat across the Atlantic, with no motor, or electrics, ( or GPS) just like his great-grandfather.  He also skippered many  jets across that ocean, also without GPS, and often under ETOPs rules. 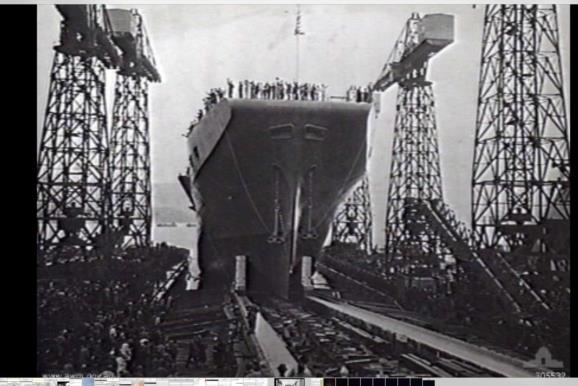