Reply
Re: Left-handed Coutinho sextant
From: Brad Morris
Date: 2017 Jul 24, 21:54 -0400
Here is a WAG
Suppose Coutinho was a righty, and needed his right hand to fly the plane.  Keeping the plane in the air might be more important then determining position, because crashing hurts.   So he kept his predominant hand on the joystick of the plane.  That would leave his left hand free for the sextant.
For those who don't understand a WAG, it is an acronym for a Wild A** Guess.
On Jul 24, 2017 9:44 PM, "Paul Saffo" <NoReply_PaulSaffo@fer3.com> wrote:

We haven't talked about left-handed sextants for some time...

I was in the Naval Museum in Lisbon earlier this year, specifically to see Adm Coutinho's plane and instruments, incl his original and oh so famous Coutinho AH sextant.  I have a 1941 Tamaya with the Coutinho AH on it (Likely OEM'd by Plath), so didn't expect any surprises.

Except... I was surprised to see that Coutinhho's sextant is left-handed! Pic attached.

So, noting that only 10 percent of the population is left-handed, Coutinho's "left-handed" design must have been created for some purpose other than benefitting us in the minority.

Perhaps someone can enlighten us to the advantages of a left-handed sextant for righties? 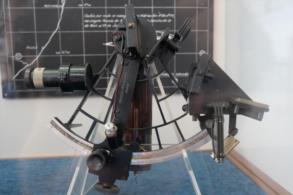